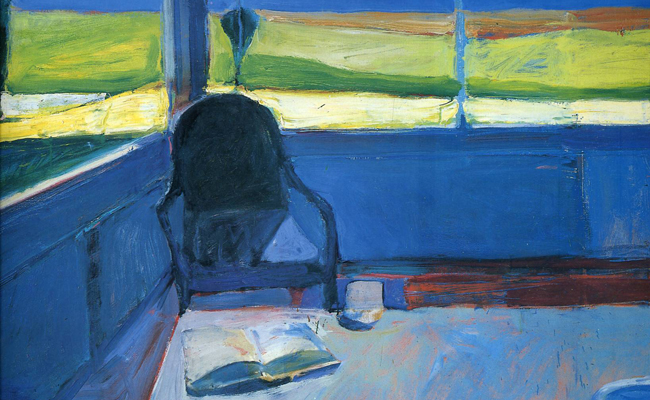 Home › AbEx/Post War › Interior with a Book by Richard Diebenkorn

Interior with a Book by Richard Diebenkorn

“I can never accomplish what I want – only what I would have wanted had I thought of it beforehand.” – Richard Diebenkorn

Abstraction is what he is famous for – and that includes richly gestural works from a variety of periods including the times when he lived and worked in various places such as New York City, Woodstock, Albuquerque, New Mexico, Urbana, Illinois and Berkeley, California (1953-1966). But his body of work completed over many decades, the artist died in 1993 at the age of 71, includes many figurative, landscape and still lives that served as a foundation for his large scale abstractions. One of the reasons we are featuring this painting before focusing on his better known abstractions is that understanding the basis for any transition in an artist’s style is important in understanding his future works. As with many abstract painters of the 1940’s and 1950’s, think Rothko and his Subway Series, the path to abstraction for Richard Diebenkorn lay in taking familiar objects and views and finding new ways of interpreting them. A language that was particular to his environment.

Interior with a Book is a wonderful example of this transition. Here Diebenkorn used some of the techniques he borrowed from Henri Matisse: bold palette, minimal blending of color, the fattened perspective and the sparse interior, but made it uniquely his own by treating the space through the language much more aligned with the middle of the 20th century.

His lines are much more abstract, and there are clear similarities between the way he treats his interiors and exteriors. He is interested in the geometry of a space – be it an enclosed room or a vast field seen from afar. It is that convergence of lines and angles, forms distilled to their primary shapes: circles, rectangles, triangles, that connects his figurative paintings to his Ocean Park abstractions. You can find landscapes in his abstractions and at the same time you can find abstractions in his portraits. In a sense his non-objective paintings retain a strong sense of objects and this is the distinguishing characteristic that separates Richard Diebenkorn’s paintings from any other artist of the movement.

The painting is on view at the Nelson Atkins Museum of Art in Kansas City, MO.