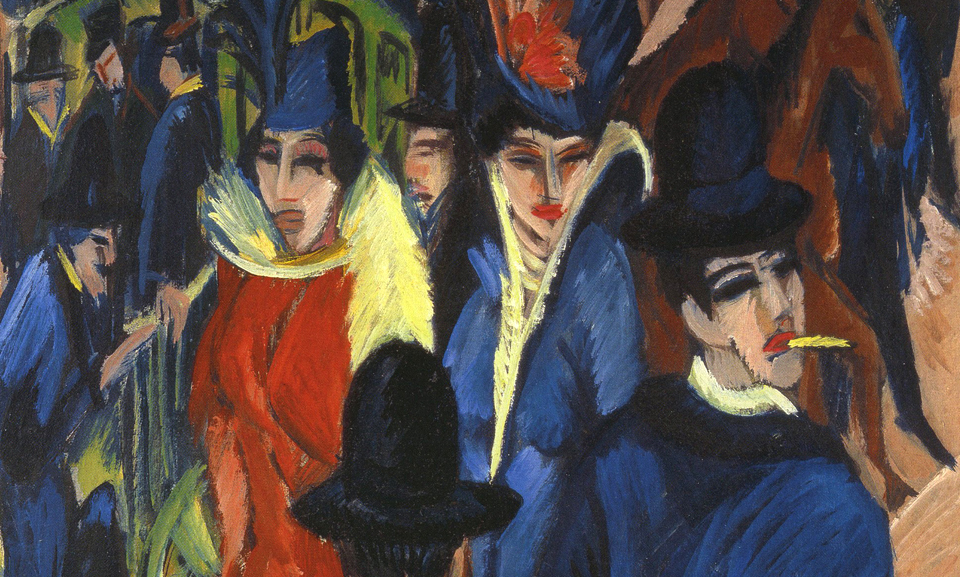 “It seems as though the goal of my work has always been to dissolve myself completely into the sensations of the surroundings in order to then integrate this into a coherent painterly form.”*

Ernst Ludwig Kirchner was the leading figure of the group of German artists called “Die Brücke” (The Bridge), which aimed to abandon the traditional academic style then favored in Prussia and develop a new kind of artistic expression that would form “a bridge” between the past and the future. This dynamic oil on canvas in a distinct and bright color palette comes from Ernst Ludwig Kirchner’s Großstadtbilder (pictures of the metropolis) series that he started when he moved from Dresden to Berlin in 1911.

In Street Scene in Berlin, which appears almost as a snapshot hastily taken when passing through the crowd, Kirchner sought to evoke a dynamic sense of constant movement. On the eve of World War I, Berlin was one of the largest cities in the world: intense, charged and extremely energetic. The entire Großstadtbilder series can be seen as a response to a psychological experience of an individual in the overcrowded urban metropolis. Vivid anti-naturalistic, nearly caustic colors and acute dense composition create almost claustrophobic experience. As main figures in this anxious atmosphere Kirchner depicted two streetwalking prostitutes that can be identified by their bright feathered headpieces, rouge lips and flamboyant attire.

“For Kirchner, the prostitute was a symbol of the modern city, where glamour and danger, and intimacy and alienation necessarily coexisted, and everything was for sale.”** While these women definitely capture our attention, the reaction of the two men in front of them is ambiguous. It is unclear whether they paused or are quickly moving away. One of them defiantly spun his head almost all the way around. Could it be in disgust?

In 2006, this landmark of German Expressionism, Street Scene in Berlin was restituted to the heirs of its original owners who had to sell the painting in the 1930s under duress due to persecution by the Nazi government. It was then put up for auction at Christie’s where it was acquired by Ronald Lauder’s Neue Gallery in New York for $38 million.

Most interestingly, the glorious portrait of Adele Bloch-Bauer I by Gustav Klimt experienced a very similar fate. From seizure to restitution, to finding itself at Christie’s, to finally ending up at Neue Galerie….