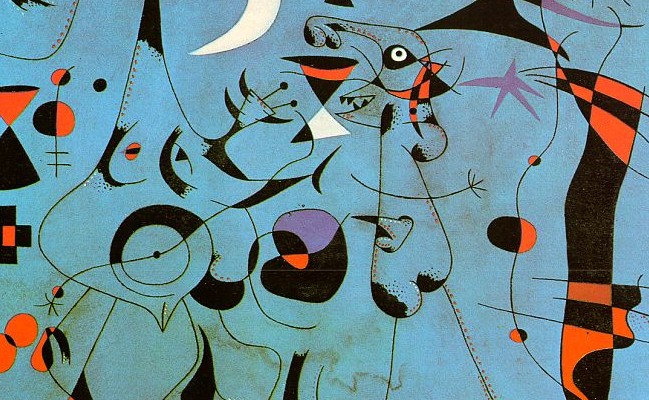 “It is as though he [Joan Miro] had decided to condense all that he loves most – women, the night, stars, birds, dewdrops at dawn, into small paintings, while emphasizing the precarious illusory nature of our existence.” – art critic Roland Penrose

Figures in the Night Guided by the Phosphorescent Tracks of Snails is at once recognizable as the work of Surrealist master Joan Miro. Even an art novice could link this piece to the artist through its use of linear, abstract shapes, its extreme two-dimensionality, the overlapping figures, and the use of only three to four colors.

But look at it closely.  Once you try to decipher the imagery of this painting, the simplicity gives way to a very nuanced complexity, and to the very complexity of Miro’s mental space at the time. Part of the “Constellations” series (1939-1941), made in Varangeville, a small village in Normandy, France, this painting (along with its companions) were made as a form of art therapy by Miro to cope with the impending war. At a time when all of Europe was in turmoil, Joan Miro exiled himself in the French countryside and executed what is considered to be the highest form of his work. “I felt a deep desire to escape. I closed myself within myself purposely. The night, music, and the stars began to play a major role in suggesting my paintings,” said Miro to his friend John Sweeney.

Truly, looking at this painting, one gets the sense that they are looking at the activity inside Joan Miro’s brain. The absence of a clear narrative, and the overlapping of the figures give this piece a very dreamlike and serene quality. This effect is further highlighted by the minimal use of color. Perhaps, the title was referring to Miro’s desire to be led away from the darkness of war into a shinier, brighter future?

In 1945, this series generated a lot of excitement in New York when it was exhibited for the first time at the Pierre Matisse Gallery. It would be fair to say that it can also be credited with influencing the New York Surrealist and Abstract movement.