Tatlin at Home by Raoul Hausmann

“We called [the] process “photomontage,” because it embodied our refusal to play the part of the artist. We regarded ourselves as engineers, and our work as construction: we assembled our work, like a fitter.”

Raoul Hausmann (not to be confused with Georges-Eugène Haussmann, the man responsible for the re-design of central Paris and its now-famous boulevards) was one of the founders of the Dada group in Berlin and a pioneer of a new type of art making called photomontage. The idea of photomontage was influenced directly by the Cubist collage and was transformed by Dada into a revolutionary new pictorial presentation with the help of photographs and other printed materials.

See Guitar on a Chair by Juan Gris 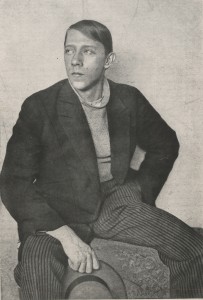 Dada came out as a group of artists in the aftermath of World War I in Zurich and later in Berlin and Paris. It was an atmosphere of radical political, social and technological changes in Europe that urged the Dadaists to move beyond aesthetic pleasure and attempt to change people’s lives through artistic innovation. For Dada the aesthetic of their work was secondary to the meaning it conveyed. This approach often implied unconventional re-imagining what art and art making could be.

Tatlin at Home depicts a prototype of  “mechanical thought” rather than the actual representation of Vladimir Tatlin, one of the most important figures in Russian avant-garde, the key artist and architect of the Constructivist movement. Constructivism was devoted to making use of art only for practical, social purposes and Tatlin became renowned for his ambitious, utopian project of the Monument to the Third International. The important detail about Dada though is that their work was often infused with spontaneity and irrelevance, and in the present work Hausmann stays true to the Dadaist ideals and uses a found photograph of a random man to depict Tatlin! (yes, this is not Tatlin himself)

In 1967 Hausmann recalled: “In the Berlin of 1920… the avant-garde spoke enthusiastically about machine technology, of which they had only a vague idea. One day, I thumbed through an American magazine absolutely absent-mindedly. All of a sudden, the face of an unknown man struck me, and I do not know why I automatically made the association between him and the Russian Tatlin. …But above all, I wanted to make the image of a man who had nothing in his head but machines, cylinders and motors, brakes and car steering wheels. This man must be thinking of a grand machine. I searched for this in my photos and found the stern of a ship with a huge propeller. This I put behind on the back wall. Didn’t this man also want to be a voyager? Here is the map of Pomerania on the left wall.”