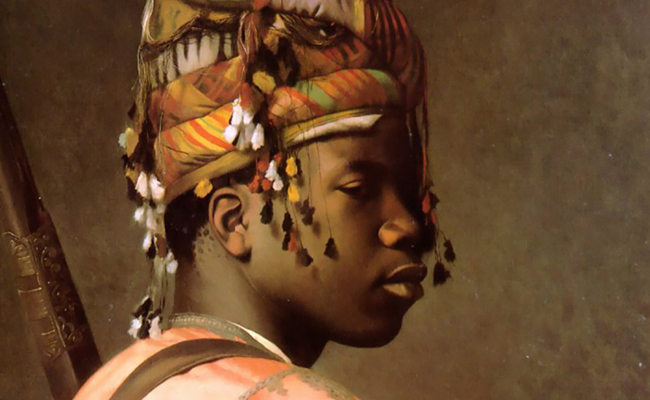 With pedantic care Jean-Léon Gérome painted his models and every detail of the setting – (click on the image to expand to full view) look at the detail on the young man’s head dress, the exquisite embroidery on his sleeves and the sheen on the ivory  of his musical instruments – the smooth surface of the marble floor, the pigmented tiles, furniture and the clothing. And although the dress and all attributes are historically accurate, Gérome reconstructed the dress and the attributes in his Paris studio, hiring a model to represent a soldier of the Ottoman Empire.

Throughout his artistic career the artist made numerous visits to Egypt, Turkey, Syria, Palestine and Sinai. His unfailing interest in the depiction of scenes from the life of the Muslim world gave him a reputation as an “ethnographic” artist, of which he was very proud.

If you’re a cultural or a physical anthropologist Jean-Léon Gérôme could very well be your Rosetta Stone to the cultural traditions of the past, especially those of the “Orient”. Gérome produced very precise representations not only of exotic costume, architecture and interiors, but also of different ethnic types. The style of Gérome’s oriental works, realistic in content and classicizing in technique, is often described as “academic realism” or “Academism” and thus provide great documentary value to historians. Here are more images of Gerome’s work from the recent exhibition a the Getty Museum in Los Angeles.

This painting is in the permanent collection of the Metropolitan Museum of Art in New York.