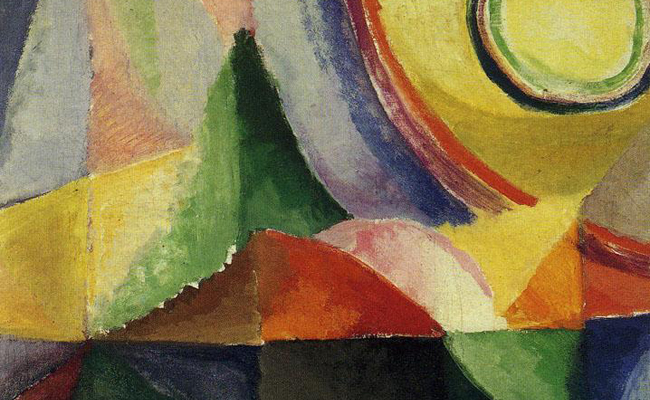 “I have lived my art!” – Sonia Delaunay

Simultaneous Contrasts, by Sonia Delaunay may be described as colorful, beautiful, and almost as elementary as pretty. While these adjectives may be true, don’t let the painting’s apparent simplicity fool you. Depending on which school of art historical gossip you subscribe to, Simultaneous Contrasts could be viewed as the first example of abstract art. (The argument here is of course Wassily Kandinsky’s Picture with Circle dated 1911).

Geometric forms that made up Sonia Delaunay’s composition were popular motifs at the time. Clean, simple geometric shapes were emerging across the art forms including fine art, commercial and industrial design and architecture. Industrial designs often influenced artists and as a result one of Robert Delaunay’s (Sonia’s husband) paintings, Homage to Bleriot (1914), mimicked the motion of a plane propeller: the same orb-like circular forms you find in Sonia’s painting. Sonia and Robert Delaunay’s work is associated with Orphism, a movement they developed together, but the term itself was coined by the great French poet and surrealist Guillaume Apollinaire. According to the New York Times critic Roberta Smith Orphism was seen as an “especially radiant French brand of Cubo-Futurism”.

Born Sarah Stern in Gradizhsk, near Odessa, into a Jewish family, Sonia Delaunay was adopted at the age of 5 by her maternal uncle, Henri Terk, a wealthy lawyer from St. Petersburg. During World War I when money was scarce, she branched away from just painting toward the more lucrative creative field of design. This move meshed well with her anti-traditionalist approach to art. Her move to abstraction in Simultaneous Contrasts mirrors this rejection of traditional notions of fine art. “I have lived my art,” she proclaimed as a mantra, one that accurately reflects her liberal views of the limits of creativity.

Another version of the painting, also dated 1912 is in the collection of the Museum of Modern Art in New York.