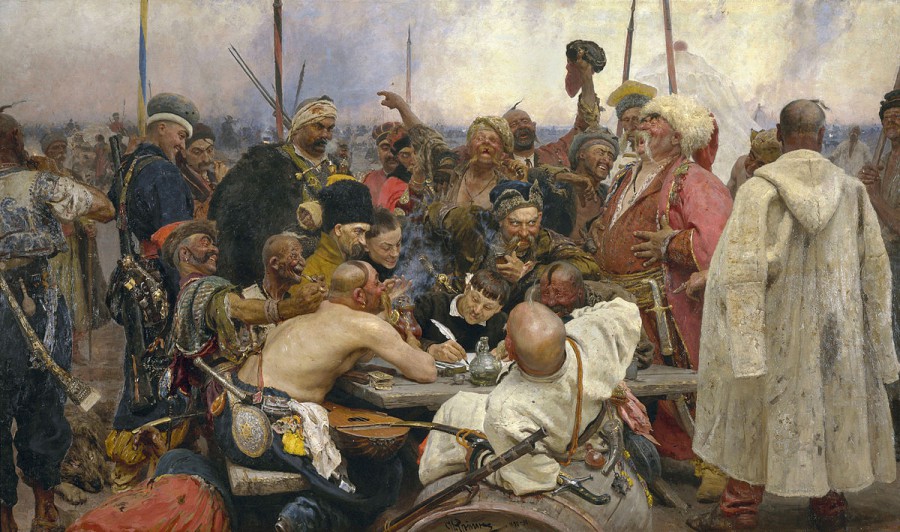 Legend has it that around 1676 the Sultan of the Ottoman Empire sent an ultimatum to the Cossacks after they defeated his army and demanded that they commanded to his rule. It was probably the absurdity of the whole situation that prompted the Cossacs to write back to the Sultan mocking his own style, parodying Sultan’s countless titles, cracking one insulting joke after another, and declaring that ultimately they would not obey to his rule.

Zaporozhtsy, or as its better known Reply of the Zaporozhian Cossacks to Sultan Mehmed IV of the Ottoman Empire (Запорожцы Пишут Письмо Турецкому Султану), 1880 – 1891 is a monumental and humorous take on the legend. Ilya Yefimovich Repin is the most renowned Russian painter of the 19th century and was as significant to Russian art as Manet to Impressionism, or Rubens to Renaissance. His life-size, unbelievably realistic works often capture historic events, or scenes he captured in his travels. What is special about this particular piece is how it fits within the genre of History painting that is traditionally focused on battles, bloodshed, victory, or defeat. Drama is what is at the core of the most historic depictions throughout centuries, but not in the case of Reply of the Zaporozhian Cossacks.

It took Repin 10 years to complete the painting and it is certainly intensely detailed with the Cossacks’ armors, fur hats, bold heads, earrings and exquisite mustache. But the component that draws you into it is the Cossacks’ wide range of vigorous emotions, from anger to amusement, expressed through their eyes, hands and poses. The unswerving scribe in the center of composition, standing out with his white collar and writing feather, brings an element of order to the reveling Cossacks surrounding him.

This really is one of the most beloved masterpieces of the Russian Academic Painting.