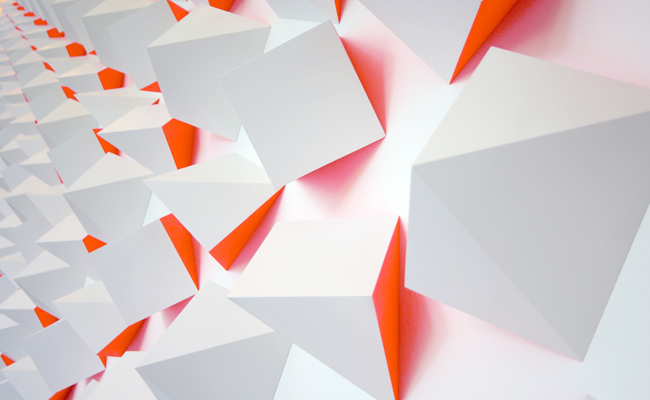 Barnett Newman famously said about his monolithic Vir Heroicus Sublimis that he expects the viewer to interact with the 20 foot-long work by moving across the entire length of the painting to be able to grasp the changing aspect ratios and relationships between elements. In essence, this directive, is the very core of Kinetic Art made famous by the Argentinian-born artist Luis Tomasello (b.1915).

Tomasello’s installations and works on board are meant to engage the viewer from the very beginning. There is no distance between the artist and the viewer – Tomasello draws you in, he wants you to touch, come as close as possible to the work and often, immerse yourself within it to fully experience his constructed spaces. Drawing from the early 20th century art, like Malevich’s White on White, Luis Tomasello references the same sensibility, ideas of space, subtlety with color and light but makes it three-dimensional. Most of his large-scale installations and wall-mounted works are founded on optical illusion where colors and shapes appear to advance and recede based on the viewers’ vantage points. His work requires concentration and awareness of self within a given space.

For instance he is widely recognized for his ‘Atmosphères chromoplastiques’ where he placed white, angled cubes, with the side closest to the back often painted a vibrant color, on a white background that allows for a play with shadow and light. As a true pioneer of optical art, he began experimenting with the effects of color reflections in his work. He then began creating more works focused on investigating the phenomenons of light. By placing the cubes in particular patterns and spacing, he is able to express movement without actually having the work itself move. This allows viewers to engage with his work and experience the art differently depending on where they stand in the room. Luis Tomassello’s efforts in the Kinetic art have earned him recognition as one of the pillars of Latin American Contemporary Art.