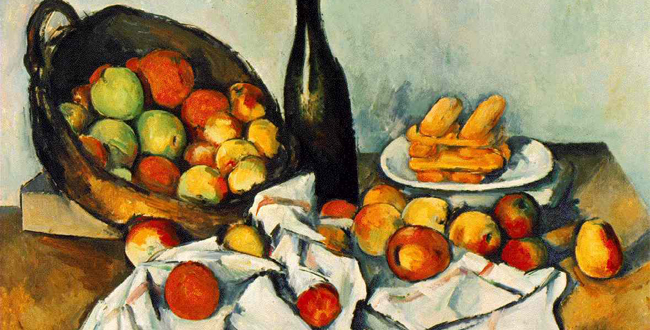 Still Life with Bottle and Apple Basket by Paul Cezanne

Probably the most famous still life painter of the last 200 years – Paul Cezanne, is credited with laying the foundation to the most influential art movements of the 20th century. His best known compositions are of simple objects – apples, peaches, oranges and pears, but what separated him from other still life painters of the late 19th century was his approach to color – its meaning and purpose, and perspective.

In contrast to Ingres, Cezanne didn’t conceal the tools with which he made his paintings. In fact if you look closer you will see brush strokes on every single object in the painting. With the advent of photography, it was no longer necessary to replicate reality and painters of the late 19th – early 20th centuries understood and embraced this shift in purpose and embarked on a new path exploring other characteristics of the medium along with their tools. In Still Life with Bottle and Apple Basket dated 1893, you can clearly see the diagonal brush marks on the table surface, horizontal marks on the fruit – it’s as if Cezanne was saying, you already know what an apple looks like, you’ve seen a peach, so let’s take it one step further and communicate other aspects of the object. Their shape, volume, color, composition, and perspective were far more interesting to Cezanne than simply replicating something that’s already familiar to the viewer.

Did you notice that the right side of the table in this painting, is not on the same plane as the left side? Cezanne used this stylized method of portraying perspective to incorporate the differences of viewpoint into an impressionistic still life. It was this technique that made it possible to bridge the gap between impressionism and cubism, which employed varying perspective and varying angles to depict subjects.

The painting is sometimes referred to simply as The Basket of Apples and is in the Helen Birch Bartlett Memorial Collection of the Art Institute of Chicago.