“…both temptation and downfall incarnate, a high priestess of melancholy and a siren of joie de vivre.”

Picasso’s La Gommeuse is among the roughly 30 works the artist created during his famed Blue Period, so named for the blue-green coloration that permeated his work at the time from 1901 until mid 1904. During that time Picasso depicted solitary figures set against almost empty backgrounds, the blue-green palette suggesting melancholy and desolation to images permeated with solitude, unhappiness and poverty, despondency, and despair. “Most prevalent among his subjects were the old, the destitute, the blind, the homeless, and the otherwise underprivileged outcasts of society.”

La Gommeuse dates from the second half of 1901, following Picasso’s widely-praised exhibition at Abroise Vollard’s gallery in Paris that June and amidst the sobering aftermath of his close friend Carlos Casagemas‘ suicide in February of 1901. It is very likely that the inspiration for the female figure in La Gommeuse was a well-known Parisian performer, a singer named Émilie Marie Bouchard who performed under the stage name Polaire. Scholars suggest this connection because of Polaire’s easily identifiable wavy black hair (she was also famous for her 16″ waist, clearly not reflected in the current portrait) and we know that around the turn of the century, when Polaire was performing in Paris, she was referred to as “la gommeuse épileptique” because of the way her body shook as she shifted her feet from side to side as she performed.

Curator and Picasso historian Marilyn McCully wrote in her essay:

“The painting known as La Gommeuse represents a pivotal moment in Picasso’s artistic development in 1901, the year in which he had his first major exhibition at Ambroise Vollard’s gallery in Paris (24 June-14 July 1901). That show had featured more than sixty paintings and drawings, which reflected the young Spaniard’s immediate response to recent French art. The major influence was Toulouse Lautrec, both in subject matter – café scenes, prostitutes and dance halls – and, to some extent, technique, but Picasso’s subsequent focus on isolated figures and restricted, subdued palettes in his new works emphasized his own exploration of the theme of loneliness and his inaterest in formal experimentation. The depictions of syphilitic prostitutes and poverty-stricken mothers in his Blue Period of late 1901-1902 was in many ways anticipated in La Gommeuse and works related to it.” 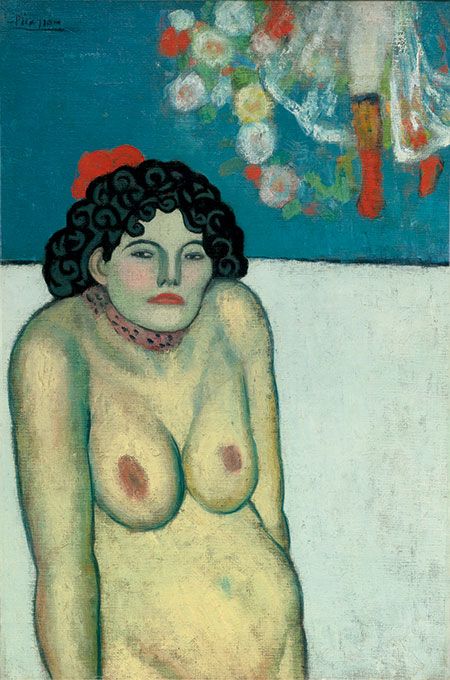 Of the 30 odd works from Picasso’s Blue Period only 4 paintings appeared on the market in the past 28 years. Sotheby’s provenance on this painting includes the following information on La Gomemuse.

“Recent scholarship devoted to Picasso’s production of 1901 suggests that the present work was acquired by Ambroise Vollard sometime after 1906. In later years, it came into the possession of the young New York dealer Lucien Demotte, who sold it to Josef von Sternberg (1894-1949), one of the most acclaimed Hollywood film directors of the 1930s. Sternberg is best remembered as the director of the 1930 film The Blue Angel, in which Marlene Dietrich made her screen debut as the louche cabaret performer Lola Lola. It appears that Sternberg acquired this work about one year after the release of The Blue Angel, so the subject of La Gommeuse would have held great significance for the director.”

La Gommeuse has been in a prominent American private collection since 1984 and will be the featured lot during Sotheby’s November 2015 Impressionist and Modern Art Evening Sale in New York.

UPDATE: Tha painting was sold on November 5th, 2015 for a record $67.5 million, including the buyer’s premium.