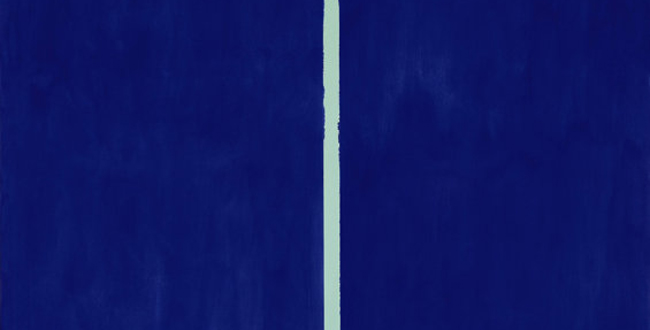 Sotheby’s New York seems to be doing things just right these past several seasons as the auction house secured several significant artworks by the brightest stars of Abstract Expressionism and set public sale records for Gerhard Richter and Barnett Newmann.

Last night Tobias Meyer, head of Sotheby’s contemporary art department worldwide and the event auctioneer, sold the brilliant blue canvas by Barnett Newman “Onement VI” to an anonymous bidder for a total of $43.8 million thus breaking the artist’s previous record of $22.5 million set by Christie’s just a year ago.

Onement VI – the single panel electric blue 8.5 foot by 10.5 foot canvas completed in 1953 and featuring Newman’s signature vertical zip, was consigned to Sotheby’s by Paul Allen, the billionaire co-founder of Microsoft. Allen acquired the painting in 2000 from a private collector for an unnamed sum. It’s rare that an artist sees such dramatic price ascension in such a short time, but less than a sign of market confidence, the final result can be seen as a potential return to speculation on a specific art historical segment. Abstract Expressionism has been the most stable market segment seeing consistent price increases and interest from buyers. Since this is a finite market with a pre-determined number of A level works, buyers are more likely to make an investment into a work by Mark Rothko, Richard Diebenkorn, Barnett Newman, Franz Kline and others than in any other segment and feel a certain sense of confidence in their ROI.

According to the New York Times the buyer of Gerhard Richter’s “Domplatz, Mailand [Cathedral Square, Milan]”, 1968, another record setter of the evening, Donald L. Bryant, a New York businessman, plans to hang it in his yet to be completed house in Napa Valley. The painting sold for combined total of $37.1 million which is a ten-fold increase of the previous sale price of $3.6 million in 1998.

Among other successful sales of the evening was a gray-scale work by Cy Twombly, a Donald Judd installation, a signature white painting by Robert Ryman and several works by Yves Kline, including a blue sponge sculpture and works on paper.

Of the 64 works offered at last night’s auction 11 failed to find buyers, including the mystifying “sculpture” of Hoover vacuums by the darling of the contemporary art market Jeff Koons. We are looking at this development as the step in the right direction.