“The landscapes were in my arms as I did it,” Ms. Frankenthaler told an interviewer. “I didn’t realize all that I was doing. I was trying to get at something — I didn’t know what until it was manifest.”

It’s good to consider the quote but may we suggest you don’t try to look for the figurative references in this or any of Frankenthaler’s other paintings. They are not there. Color, surface, scale and texture are what she focused on in her paintings and those elements are what we should consider when looking at her works. Frankenthaler’s paintings are typically very large, expansing far beyond your standard field of vision, so you tend to regard them on a human scale. In Canyon, the energetic, brilliant field of a cluster of reds is contained on three sides by the deeper, cooler greens, but the top of the painting is left to breathe. It’s almost as if the artist gave the reds a place to escape (or pour in from).

Canyon, dated 1965, was created by pouring and then spreading acrylic paints onto an unprimed canvas. This means that the surface was not gessoed or treated in any way, to allow thorough penetration of pigment into the weave of the material. This was kind of an evolution of Jackson Pollock’s dripping and became known as Color Field painting — although Clement Greenberg, the critic most identified with it, called it Post-Painterly Abstraction.

Another difference between Pollock’s technique and Frankenthaler’s lay in the type of pigment they used and the way they applied it to the surface. Both painted with the canvas laid out horizontally on the floor, un-stretched, to allow for better control of application. However, due to the lack of funds and post war artists’ paint scarcity Jackson Pollock used regular household enamel to create his drip paintings. The paint rested on top of the canvas without getting absorbed into its fibers. (See close up detail below). 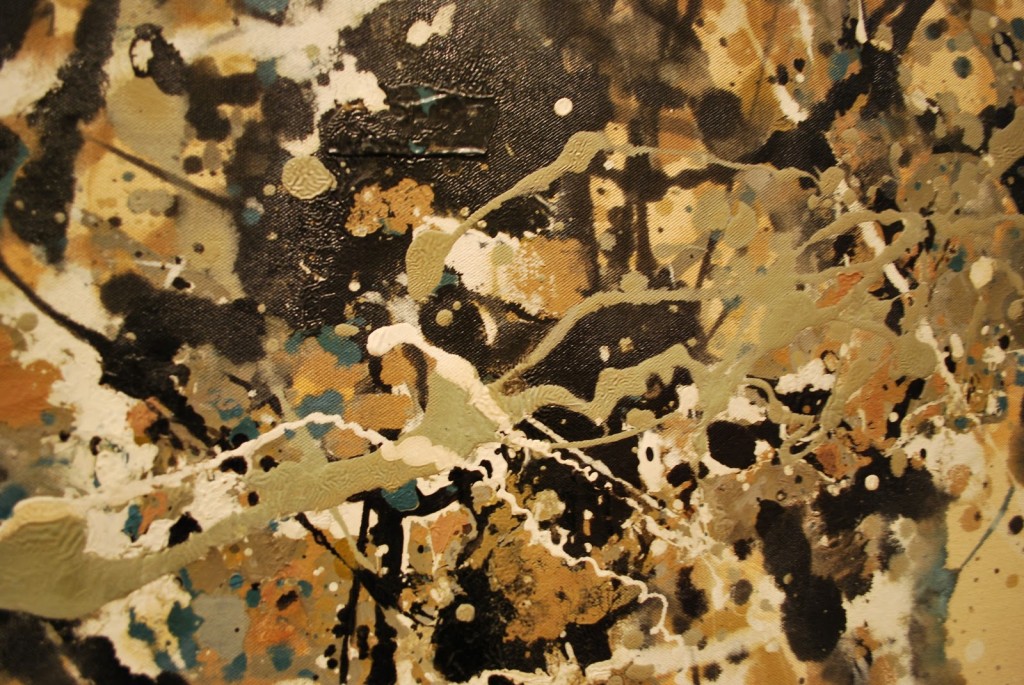 Frankenthaler on the other hand, poured turpentine-thinned artist grade paint to create watery amorphous pools, stains, lines and fields. In another contrast to Pollock, Frankenthaler actively interacted with the paint and manipulated its direction, by moving it across the surface using a wide squeegee, her hands and brushes. This made her compositions meditative and soft, her language a unique translation of color and surface, comparable only to poetry or music.

Helen Frankenthaler  trained briefly  under a famous abstractionist Hans Hofmann, much like many of the other New York painters of abstraction of that time. Eventually, Frankenthaler herself influenced the Color Field movement and painters like Kenneth Noland and Morris Louis.

This article ©galleryIntell. Canyon by Helen Frankenthaler can be seen at the Phillips Collection in Washington, D.C.