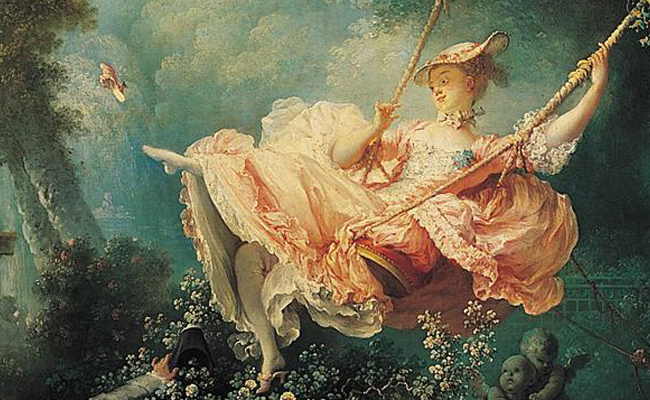 The Swing by Jean-Honoré Fragonard

Jean- Honoré Fragonard’s The Swing was essentially a commission passed to him by another painter Gabriel-François Doyen. The painting’s storyline and composition was proposed to Doyen by a gentleman of the court, who wanted a painting of him and his mistress. The exact identity of the patron is unknown, though he was at one time thought to have been the Baron de Saint-Julien, the Receiver General of the French Clergy, which would have explained the request to include a bishop pushing the swing. Gabriel Doyen refused  the commission and instead passed it on to Fragonard who removed any references to specific people but kept the concept of the original proposal.

Click on the detail to see the full image.

So here we have a young girl on the swing flying carelessly through the air, pushed from behind by an old man. Her right slipper flies, oh so conveniently, off her foot and suddenly the young man, lounging in the low bush, enjoying the view above him, comes into view. In fact, he is looking right up her frothy pink and cream skirt! So you see, it is a conspiracy of the two lovers whose flirtatious little game goes not only unnoticed by the old man, but where he is in fact an active participant in this concealed peep show. Furthermore, the painting is filled with symbolism. In the 18th century France, a woman’s shoeless foot symbolized nudity, as did the man’s uncovered head and his hat, reaching towards the young girl’s parted legs. “Dolphins driven by cupids drawing the water-chariot of Venus symbolize the impatient surge of love.”*

The Swing is the very embodiment of Rococo painting. A style developed in the 18th century in Europe that favored asymmetrical, ornate designs, lush imagery, pastel colors and playful subjects. Fragonard’s beautiful paintings, a delicate blend of  the Italian Baroque and Dutch Landscape painting, were well received in Paris and he was expected to “save” the French historical painting traditions. It was an expectation he chose not to fulfill, neglecting royal commissions in favor of work for private collectors.