“Good painting is like good cooking; it can be tasted, but not explained.”

This large rhythmically painted urban landscape represents a small town on the Seine, west of Paris – a site associated with Claude Monet and Pierre-Auguste Renoir in the early years of the Impressionist movement. Maurice de Vlaminck initially earned a living as a violinist, music teacher and a professional cyclist but a chance meeting with Derain in 1900 changed his life and placed him in history books. Restaurant de la Machine at Bougival was painted in 1905, the break-through year for the Fauves which became the first actual movement and the first true innovation of the twentieth-century art. 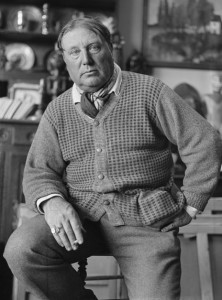 Influenced by the Post-Impressionists, Vlaminck and his fellow artists rejected traditional three-dimensional space and sought to build composition with the movement of color planes. Derain and Matisse were principally influenced by Gauguin (think about his intense hues and exotic color combinations), meanwhile Vlaminck was more profoundly affected by the heavy brushwork and unusually saturated colors of Vincent van Gogh. However, starting 1908 this lavishness of colors in Vlamick’s work was replaced by monochromatic and somber palette – an indisputable impact of Paul Cézanne.

Restaurant de la Machine at Bougival was first exhibited at the third Salon d’Automne, where it was hung amongst the works of artists soon to be known as Les Fauves (“The Wild Beasts”) – thanks to the critic Louis Vauxelles who was shocked, certainly in a positive way, by their wild and daring palette and passionate brushstrokes. “The wildest of the Fauves,” as the poet Guillaume Apollinaire admiringly called him, Vlaminck, along with Henri Matisse and André Derain, became one of the leaders of the movement.