And it is that “catastrophe” that cataclysmic event that comes to mind when you first encounter this explosive 1928 painting by Wassily Kandinsky – the artist credited with creating the first ever abstract painting. The “catastrophe” we are referring to is, of course, the Big Bang. The prevailing cosmological model for the universe that, according to modern calculations, places the age of the universe at some 13.8 billion years.

It’s easy to see that the Cosmos permeates every element of this composition, from the spherical shapes to the darkness upon which they float, from which they emerge, to the energy with which they expand towards the edges of the canvas, to the nebulae surrounding the shapes. It is all about motion, energy, and force.

So why the sphere? Why does Kandinsky pay so much attention to this geometric form above all others? 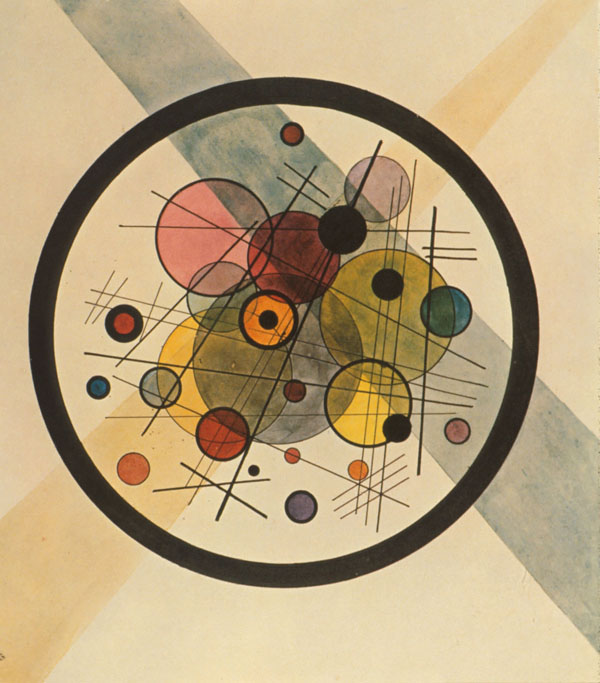 Wassily Kandinsky, Circles in a Circle, 1923

In a letter to art historian Will Grohmann Kandinsky explained: “It is a link with the cosmic. But I use it above all formally …. Why does the circle fascinate me? It is: one – the most modest form, but asserts itself unconditionally. Two – precise, but inexhaustibly variable. Three – simultaneously stable and unstable. Four – simultaneously loud and soft. Five – a simple tension that carries countless tensions within it. The circle is the synthesis of the greatest oppositions. It combines the concentric and the eccentric in a single form, and in equilibrium. Of the three primary forms, it points most clearly to the fourth dimension.”

According to Sotheby’s lot notes, “The first owner of [Deepened Impulse] was Otto Ralfs (1892-1955), a businessman and art collector based in Braunschweig. Ralfs was instrumental in supporting the careers of several emerging artists, including the Mexican muralist Diego Rivera, and founded the Kandinsky Gesellschaft and Klee Gesellschaft in 1925. These organizations ensured that each artist receive a monthly stipend from contributing private collectors in Germany and Switzerland. In exchange, the collectors were eligible for discounts on works of art and received a drawing or painting as a New Year’s gift. Like so many of his generation, Ralfs went bankrupt in the 1930s and sold his collection. According to Vivian Endicott Barnett, Ralfs sold Vertiefte Regung to a private collector in Mexico City with the assistance of Rivera, who had wanted to purchase the painting for himself but was unable to afford it.”

UPDATE: This painting was sold on November 5, 2015 at Sotheby’s in NYC for $6,41 million, including buyer’s premium.