The Smiling Spider by Odilon Redon

“One must respect black, nothing prostitutes it. It does not please the eye and it awakens no sensuality. It is the agent of the mind far more than the most beautiful color to the palette or prism.” – Odilon Redon

Smiling spiders, cyclopes, macabre animals and plants with human heads – the creatures in Odilon Redon’s noirs  (“black things”, Redon’s own affectionate term for his charcoal drawings and lithographs), are equally unsettling and fascinating. This fusion of natural and fantastic belongs to the Symbolism movement where the images are derived from artist’s dreams and fantasies, his visits to the Natural History Museum, reflections on Darwin’s evolutionary theories and on the early stages of psychiatry and dream research, and finally, his fascination with the invisible world of science that can only be discerned through the microscope. 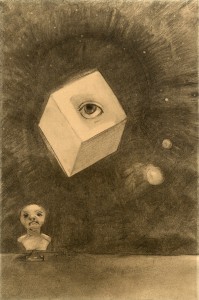 A late starter, Redon (1840-1916), after numerous setbacks and false starts, gradually began to find a style of his own from the mid 1870s. It wasn’t until 1879, and the publication of his first album of lithographs Dans le Rêve that Redon’s work began to attract wider attention. These superb monochrome charcoal drawings and lithographs dominated Redon’s production until he was almost fifty years old and served as the basis for his reputation. And while color lithography had been developed in France as early as 1837, Redon stayed true to black until the 1890s, thus dividing his prolific oeuvre into two periods: his noires and his later pastels and paintings with their distinctive intense colors.

Some of the imagery in Redon’s art of his noire period is infused with bizarre and grotesque characteristics bringing to mind the art of political caricature, which was thriving in Europe throughout the nineteenth century. Dramatic use of light and shadow is no less than an impeccable tribute to the oeuvre of Rembrandt. And while Redon’s art was profoundly idiosyncratic and hardly can’t be paralleled with any other work of modernity, he made a profound impact on his contemporaries (namely the Nabis influenced by Redon’s later radiant palette) and on the 1920s art movement, which carried on his investigation of the unconscious (the Surrealists).