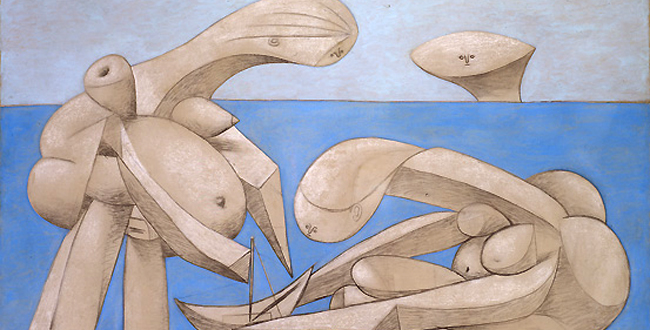 At the 55th Venice Biennale, the Peggy Guggenheim Collection is a canon of modernism.

I’m going to start with a confession. I thought I’d hate Venice the first time I came here six years ago but in spite of all my efforts I found myself desperately in love with the city. So enamored in fact with all its architectural beauty, that I never got to visit the famous Peggy Guggenheim Collection and, as it turned out, I never regretted not seeing any other museum than this small white marble palazzo wrapped in an ornate wrought iron gate. On my second visit I ran, well I ferried myself and then ran, to the museum before I even checked into the hotel.

Breathtaking? Quite. Fairytale Venice? Yes! Exquisite? Beyond any expectation.

The woman who was responsible for launching the careers of so many superstars of European and American Modern Art was clearly still the heart and soul of this magnificent collection of art. Roy Oppenheim wrote of Guggenheim “I had the privilege of meeting Peggy Guggenheim twice. She was a fascinating, open woman of the world, who was good friends with nearly every protagonist of classical modern art. A woman who not only constantly questioned bourgeois social conventions, but merrily broke them.”

To better understand the Peggy Guggenheim Collection think of it this way: MoMA – condensed and reduced to the very best and the most exquisite examples. Here in the small rooms hang the rarely seen gems by Lissitzky, Malevich, Hoffman, Picasso, Gorky, Dali, Rothko, Picabia, Diebenkorn, Dubuffet but not just any work, arguably their best works. 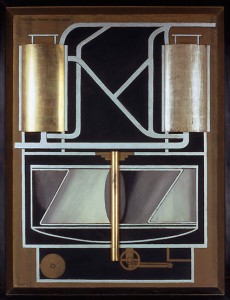 Some of the most notable works in the collection were acquired in the late 1930’s – 1940’s as Europe was spiraling into the Second World War. Guggenheim, determined to build a collection of  the “art of her own time” was on a “painting-a-day” buying spree. Her biographer wrote of this period: “In 1939-40, apparently oblivious of the war, Peggy busily acquired works for the future museum, keeping to her resolve to “buy a picture a day.” Some of the masterpieces of her collection, such as works by Francis Picabia, Georges Braque, Salvador Dalí and Piet Mondrian, were bought at that time. She astonished Fernand Léger by buying his Men in the City on the day that Hitler invaded Norway. She acquired Brancusi’s Bird in Space as the Germans approached Paris, and only then decided to flee the city.”*

As with any great art collector, Guggenheim’s intuition and passion were evidently the principal guiding factors on which works to acquire and why, and because of its overall size and focus on a specific genre of [Modern Art] the museum is easy to take in and navigate. Living size rooms flow into one another, allowing us to witness a natural development and progression of philosophies, techniques, textures and colors. There is a clear cohesiveness to the collection and each painting, each sculpture fits into the overall concept like a perfect puzzle piece. Andre Masson‘s surrealist canvases (Bird Fascinated by a Snake, above) are succeeded by Jackson Pollock’s early thematic and stylistic searches. Better than at MoMA, in these paintings you can see the birth of Pollock’s signature drips and his particular method of building and moulding paint. 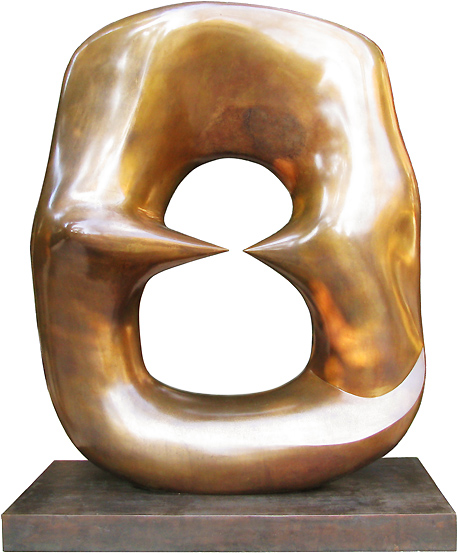 Here Piet Mondrian‘s rust-colored Ocean No 5, with its emphasized flat surfaces and a play on perspective is in perfect dialogue with René Magritte‘s famous Empire of the Light. Robert Delaunay‘s rear view mirror shaped Windows Open Simultaneously and Fernand Léger‘s mechanical Men in the City hang in perfect harmony. Henry Moore‘s fluid bronze Working Model for Oval with Points, 1968-69 (left) poised in the central courtyard of this Venetian mansion and framed by beautiful garden behind it is alone worth the pilgrimage. (Look closer at the sculpture and you may see two forms facing each other: a mother holding a child on her lap.) 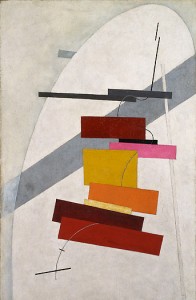 Also part of the Peggy Guggenheim museum is a newly added Hannelore B. and Rudolph B. Schulhof Collection, bequeathed to the Solomon R. Guggenheim Foundation in 2012 by Hannelore B. Schulhof. Housed in one of the side wings of the mansion the collection focuses more on American Abstract Expressionism and includes some classic works by Joan Mitchell, Julius Bissier, Alberto Burri, Eduardo Chillida, Tony Cragg, Richard Diebenkorn (his black and white abstractions on paper are just as powerful as the large-scale paintings on canvas), Jean Dubuffet, Willem de Kooning, Barbara Hepworth, Agnes Martin, Robert Mangold, Philip Guston and others.

Palazzo Venier dei Leoni, where Peggy Guggenheim lived and which is now the location of her museum, is an unfinished 18th century Grand Canal palace, its history is summarized here.