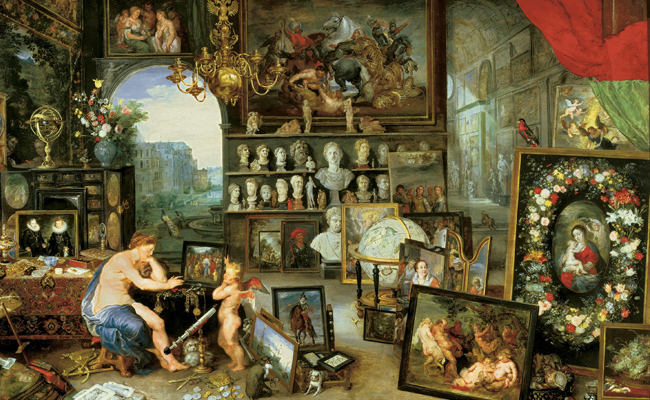 This is one of 5 paintings titled The Five Senses painted in 1617 – 1618 by two Flemish masters Jan Brueghel the Elder and Peter Paul Rubens.

What makes this painting interesting are the details that make up the composition. So let’s take a look at what we are really looking at.

The two animated figures are Venus and Cupid. Here Cupid shows Venus a painting with a Christian theme, The Healing of the Blind Man, which alludes to the recovery of sight through one of Christ’s miracles. Venus and Cupid are, of course, characters from Roman mythology, adapted, in turn, from the Greeks. Look to the left of Venus and you will see a double portrait – a male and female figures in traditional Flemish dress. The couple in the portrait are Alberto and Isabel Clara Eugenia – the Habsburg archduke and archduchess whose collection is represented here.

Here, alongside religious imagery we see scientific instruments (telescopes, globes) pointing to the importance of astronomy and natural sciences; a Persian carpet, suggesting the wealth of the world; Roman portrait busts and a variety of paintings on canvas. Many are Rubens’ own works reproduced in this allegory. The large painting on the right of the Virgin and Child, framed by a lush bouquet of flowers (another Dutch tradition) is a collaborative effort between Jan Brueghel and Rubens where Rubens painted the figures.

From the small details within the paintings let’s direct our attention towards the overall composition. You will notice that the cavernous room in the foreground offers just a small portion of the couple’s collection. The open high arch center left features a vast garden, exotic peacocks and a row of building – the Archduke’s Palace at Mariemont. At the same time the right side of the painting extends deep into the distance, in a form of a long hallway with high arched ceilings covered with art and lined with statues.

Jan Brueghel the Elder was one of the founders of a typically Flemish tradition of the “art collection” which developed in Antwerp in the seventeenth century. These eclectic “art collections” were known as kunstkammern, translated as “rooms of art” and are meant to offer a glimpse into the depth and variety of these collections accumulated by the Dutch aristocracy. Much like Raphael’s The School of Athens, these paintings, through a use of vanishing points, scale and perspective, are meant to create an illusion of volume and distance and thus make the two-dimensional canvas appear three-dimensional. Something Matisse and Mondrian would later reverse in their own works some 400 years later.

The Allegory of Sight, viewed in an art gallery and appreciated only through seeing is, of course, meant as a visual pun.

The other paintings in the series are Sound (slideshow above),  Smell, Taste, and Touch (also above). All on view at Museo Nacional del Prado in Madrid.