“I have tried to present my sensations in what is the most congenial and impressive form possible to me.”

The very fact that the key figures in Edward Hopper’s ‘Chop Suey’ are two women dining alone at a restaurant is a testament to the fundamental changes in American society. Up until the 20’s, such behavior would have been construed as inappropriate, but the rise of feminism in the mid-1920’s contributed to gradual changes in such perceptions and restaurants began to post signs in their windows ‘Tables for Ladies’.

In 1925 one society columnist wrote that chop suey, a name commonly given to most second floor Chinese restaurants in New York City, has assumed a new, significant role in the lives of New Yorkers. It had become “a staple… vigorously vying with sandwiches and salad as the noontime nourishment of  the young women typists and telephonists of John, Dey, and Fulton streets. At lunchtime there is an eager exodus towards Chinatown of women workers employed in Franklin, Duane, and Worth streets. To them the district is not an intriguing bit of transplanted Orient. It’s simply a good place to eat.” 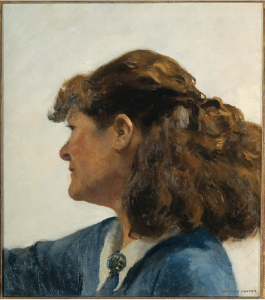 Hopper’s signature loneliness, melancholy, emotional distance, and the soundless surroundings within which they are depicted are all present here. The woman facing us, the man in the background, as well as the head of the woman piercing the left side of the canvas (her body unseen), are all depicted in a perceived state of silence. Like mannequins. In fact, we have no real understanding of the relationship between the two pairs.

Hopper used his wife, artist Josephine Nivinson, whom he married in 1924, as the model for all three female forms in his paintings. This is a painting Hopper did in 1936 of his wife at her easel. “Out of his own intimacy with the new woman in his life came a deepening focus on womanhood in all its subtlety and emotional intensity.”*