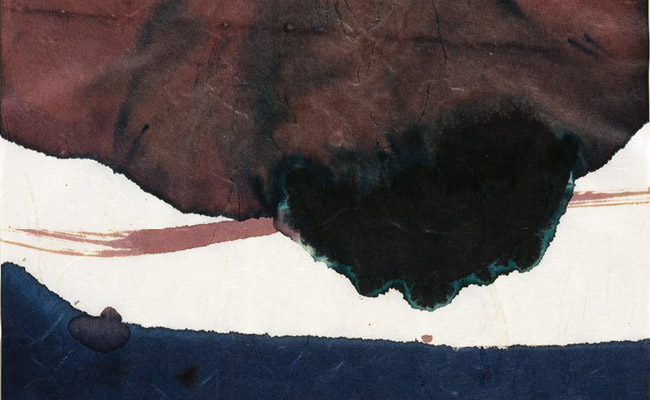 Every since his arrival from California via Harvard to New York City in 1940 Robert Motherwell became one of the most prominent members of the iconic New York School of painting and Abstract Expressionism. A well-read academician and a professor at Hunter College with a thorough understanding of philosophy and literature his work, maybe more than anyone else’s in the group drew its inspiration from literature and philosophy rather than ancient Greek, Christian and Judaic mythology and religion.

Selections from the Lyric Suite series of ink drawings on rice paper are examples of Robert Motherwell’s use of automatic drawing – one of the defining techniques in  Surrealism, and spontaneous gesture in his work. However, as spontaneous as these gestures seem to be quite a bit of preparation went into creating the series. It takes skill, time and strict technical discipline to create “simple” flowing compositions such as these. Think of the Chinese and Japanese calligraphy and the meditative process of drawing and writing – through his choice of materials, Motherwell sought to replicate these processes in the Lyric Suite series.

Robert Motherwell is probably best known for a series of large, human scale paintings from the collections of the Museum of Modern Art and the Metropolitan Museum in New York, titled Elegy For the Spanish Republic. In sharp contrast to the  series of over 100 works completed between 1948 and 1967, these Lyric Suite paintings are soft, fluid and very small. Motherwell used the inherent qualities of the materials: ink and rice paper to guide his gestures within a condensed space allowing the ink to soak through the paper and through this illustrate the full beauty of the medium.

The painting is in the collection of the Walker Art Center in Minneapolis, Minnesota.