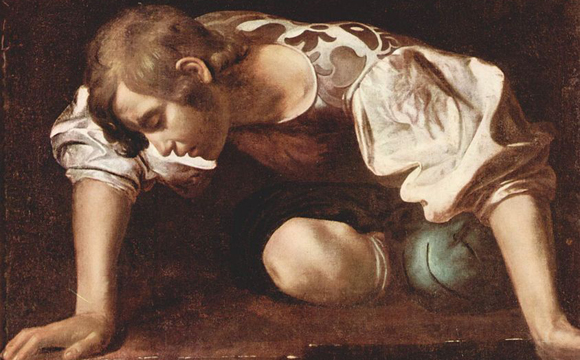 Home › Old Masters › Narcissus at the Source by Caravaggio

Narcissus at the Source by Caravaggio

And the blind seer said to his mother, “If he but fail to recognize himself, a long life he may have, beneath the sun.”

The child was Narcissus, the son of a Nymph Liriope and the river God Cephissus. According to classical Latin mythology, and later retold by the poet Ovid in his famous “Metamorphoses”, astonishingly beautiful as a child, and becoming even more so as he turned into a young lad, Narcissus broke many hearts of people of both genders who fell in love with his beauty. “And many a youth, and many a damsel sought to gain his love; but such his mood and spirit and his pride, none gained his favour.” One day, thirst beckoned him to stoop down and get some water, and the moment he laid eyes upon his own reflection he fell in love with it.

This painting was created circa 1597 – 1599 by the Italian Baroque master of radical naturalism Michelangelo Merisi da Caravaggio, or Caravaggio, who was renowned for combining elements with expertly dramatic use of light and shadow to create tonal contrasts (known as ‘chiaroscuro’ in technical terms). In this painting, through the continuous circle created by the figure’s arms, he has portrayed symbolically that Narcissus is engulfed in an endless, inescapable misery of falling in love with the unattainable.

You can feel the melancholy in the air as Caravaggio has chosen to show the scene almost with a theatrical spotlight on the figure, with the surrounding halo of darkness.