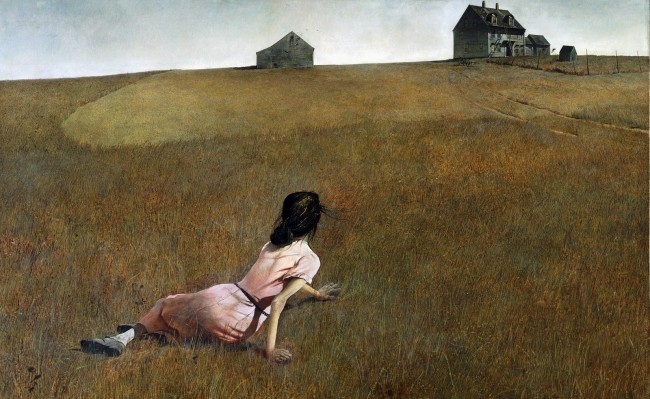 “The challenge to me was to do justice to her extraordinary conquest of a life which most people would consider hopeless.”

There is a good chance that at some point of time while browsing art, you would have seen this painting titled “Christina’s World” by American artist Andrew Wyeth. Wyeth’s uber-realistic rendition of a woman lying in the grass in an open field with her back turned to the viewer garners an instant response. Is she hurt? Is she abandoned? Does she need help? The seemingly distant farmhouse, her helpless stance, might cause a slight anxiety and unease when one looks at it. But when you consider Wyeth’s intention while painting this picture (mentioned in the beginning), it becomes a beacon of hope and positively at once!

[blockquote align=”center” style=”style1″]Did you notice the diagonal line made by the placement of the subject and the farmhouse?[/blockquote]

The woman, in fact, was Christina Olsen, a neighbor of Wyeth’s in South Cushing, Maine –  one of the two locations where he made all of his paintings, the other being his home in Chadds Ford, PA. Wyeth’s inspiration for this powerful image came about when he saw Christina crawling outside in the grass from his window – she had lost the use of her legs in her early 30’s due to a degenerative muscular condition.

Often criticized for his inability to evolve his style with the times, Andrew Wyeth’s contribution to American art is paramount. He remained loyal to Realism throughout his career and perfected this style through countless paintings depicting rural settings. His wife, Betsy, was his most painted subject. Even in “Christina’s World”, he juxtaposed her torso on Christina’s lower body, as Christina was 55 years old at the time this painting was made.

Upon its completion, this painting was shown at the Macbeth Gallery in New York City in 1948, where it was quickly acquired by the founding director of MoMA, Alfred Barr for a mere $1800! To this day, it sits proudly in its home and shines as one of the most valuable jewels of the museum.