At first site it seems an ordinary wooden sphere with a series of pentagonal apertures, but the story of its creation allows the work  to gain unprecedented depth. The artist is the omnipresent Ai Weiwei, and the material is ancient Huali wood that has been re-appropriated from various antique pieces of furniture and re-asembled, employing original wood-working techniques. This delicate work was introduced to us by Yoo Jin Lee a manager at Gallery Hyundai, Seoul.

With inspiration drawn from the 16th century creations of the Qing dynasty, Ai Weiwei – the widely acclaimed artist, activist, architect, curator – has expertly woven the past into the present. 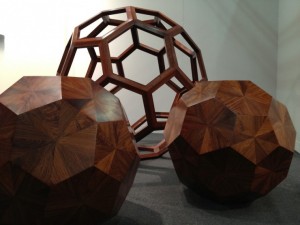 Yoo Jin Lee: A lot of people know of Ai Weiwei by now. He is one of the artists who sees the history of China very deeply. This work done by him is important because he is using a very traditional wood called ‘Huali’ wood, which is from the Qing dynasty in the sixteen hundred’s. Another reason for its importance is that he uses the traditional technique as well. In the Qing dynasty the artisans used Huali wood for making furniture. These works are made without bolts, which is one of the techniques that they used.

Here, Ai Weiwei is using the traditional ways and techniques, but he is not calling it a traditional work; it is considered to be very contemporary, so, in a way, he is mixing the past & the present. This is similar to one of his performances where he breaks down the Han dynasty urn. He is breaking the past in order to accept the future – that is his main thought. He is not just going towards the past, he is looking for the future.