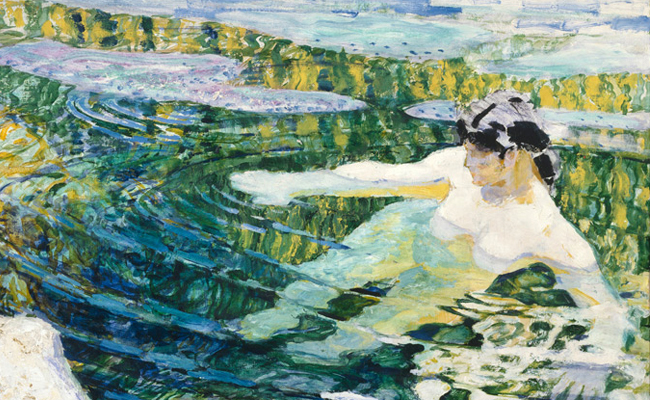 “When we try to remember a dream… often we only retain a skeleton of the dream images… a vague grid, through which fragmented forms emerge and disappear as quickly as they came. The projection of a form on the surface of the canvas is in fact merely the limiting of one surface in the relationship to the surrounding surfaces. The better painter one is, the better one binds the two”*

You can see the impressionist, almost pointillist influences in this 1906 – 1907 oil on canvas. Like in impressionism and pointillism, Frantisek Kupka’s brush strokes are evident and serve as the principal framework for constructing the composition. Throughout the painting there is minimal blending and in parts the painting almost looks unfinished. At the same time all key compositional elements appear soft and fluid, despite their material differences.

In Kupka’s L’eau everything, including rocks, water and the featureless nude female are actually metaphors for something else. Water in Freud’s theories symbolized the unconscious mind, the rocks anchoring the lower left corner of the painting – a symbol of male force and the male phallus and the nude female

“The present work is an exploration of the separation and interaction of colour as well as of the relationship between forms and shapes. For Kupka painting was not a mere imitation of nature but a subjective transfiguration of nature into an ensemble of graphic elements and gradations of light and colour to create another reality”**

Frantisek Kupka would go on to transform his visual narratives into complete abstraction. By 1911 his compositions would feature signature palettes – strong saturated pinks,  grays, purples, reds and whites making up a circular, vortex-like composition.