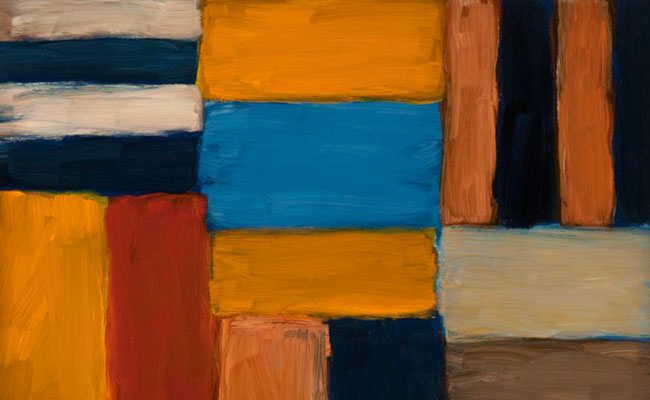 “The stripe is a signifier of modernism.”

The very first time you see a Sean Scully‘s painting you are usually surprised to discover that it’s not a single canvas with clean, organized stripes. Instead, they are usually soft fields of paint floating next to each other. Some are made up of  wood blocks of varying depths, joined together, or strips of canvas mounted one next to the other. It’s never uniform, It’s never a simple pattern on a simple surface.

Scully’s interest in stripes comes from a 1969 trip to Morocco where he saw strips of color-dyed wool, some six inches wide by almost eight feet long. These were later used by artisans in rug weaving. He commented in a 2007 interview with Brian Kennedy that during his trip to Morocco he “immediately noticed people walking around in these “djellabas“. One kind of a djellaba that men walk around in is for daily use and is made of dark brown and cream vertical stripes, and they are very beautiful, when they are hanging, when they are worn, when they are folded. Then I saw […] strips of wool, dyed and hanging on bars and drying in the sun, all of these fabulous colors straights out of the earth made with vegetable dyes, very close to black and reds, orange, blue.”

He also references tribal tribal tents that are made from strips of colored canvas that are used “until the color ran out and then they would use another color for the side panel, so you had all these arbitrary things going on, like a white and yellow tent with red and yellow on the side.” These multi-colored beach tents resembled canvas sculptures and made quite an impression on Scully who assimilated this ancient visual element as his primary language.

Sean Scully’s stripe painting are surely as recognizable as Jackson Pollock’s drips, yet in absolute terms Scully is still a somewhat under-discovered abstract painter who deserves a much wider recognition.