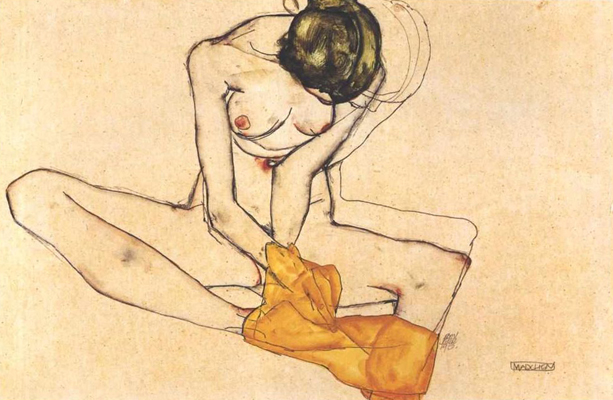 An important point to keep in mind as you look at this watercolor by the Austrian Expressionist artist Egon Schiele. Not every disrobed figure, female or male, is actually a “nude” in the artistic sense. As we discussed in some of our earlier posts, most”nudes” existed merely in the mythical renderings representing graces, goddesses or myriads of nymphs. They were largely disconnected from the mortal world and therefore were not subject to its perils. Their white as marble complexion, their gaze, sometimes disconnected altogether, sometimes addressing nobody in particular. Their faces expressed no emotion.

Schiele’s women are painfully human: their faces, their bodies are twisted with angst, love, sorrow, lust, sadness and uncertainty. The figure in this painting is half dressed. Her blanket draped over her arms, covering her hands and feet, her head is bowed, her left arm twisted across her body shielding her lower torso  – she is clearly not the disengaged nude of Bouguereau or Botticelli. Her posture screams with emotion. Is it shame? Is it despair? Schiele further isolates her by depriving her of context. We don’t know if she is sitting on the floor, or the bed, she just floats….

There is further tension in the composition and Schiele achieved it by shifting the figure off center and to the left, and by tightly cropping the space around her. It appears as if there is no space for her to even raise her head…

At the turn of the 20th century industrialization brought along a thorough re-examination of society: its philosophical foundations, its hierarchy, and the relationship between classes. Schiele painted these women at the time when the European, and Viennese society in particular, experienced a drastic shift across the social and political spectrums. Egon Schiele’s work is very much a manifestation of this re-evaluation of the class system. Son of an upper middle class family Egon Schiele was expected to abide by certain rules accepted in his socio-economic class. Painting naked figures, with their emotions vividly expressed through their body language and on their faces, was certainly not acceptable.

Dressed and undressed, in various states of awareness of themselves and the viewer they are the images that made this artist famous. Highly controversial, shocking and verging on pornographic, Schiele’s subjects included his patrons, his younger sister Gerti, Valerie Neuzil, or Wally, his model and lover for many years, his wife Edith – a reluctant model featured heavily in his later years, and scores of known and unknown prostitutes hired to pose for the cash-strapped artist.