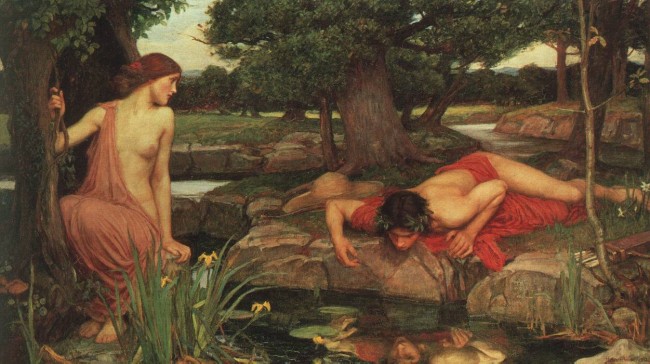 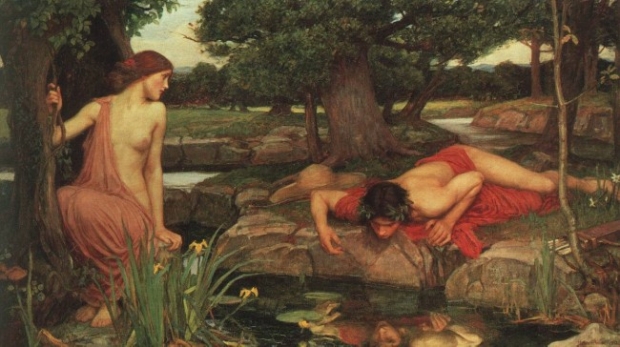 Here the artist captured a moment from Ovid’s Echo and Narcissus a well known fable of a beautiful youth named Narcissus. Men and women alike were enamored with his beauty, but Narcissus returned none of their affections. Then, a blind prophet Teiresias predicted that Narcissus would live to a ripe old age if only he does not encounter his own reflection. Contrary to the title of the story and even to this very composition, in Ovid’s story Echo is really a tertiary character, one who has no effect on the causality of Narcissus’ fate. She is just a nymph, in love with a beautiful boy. How then does Narcissus find himself at the fateful pond mesmerized by his reflection? Ovid tells us that Ameinias, a boy who was hopelessly in love with Narcissus begged the Gods to avenge his unanswered love.

A vengeful goddess Nemesis heard his prayer and led Narcissus to the pond where “Neither the shepherds nor the she-goats they tended on the hillside ever drank from it, nor did any other animal of the herd. Neither bird nor beast disturbed it…” There as Echo watched, unable to speak to her beloved, Narcissus fulfilled the prophesy and saw his reflection. He lay on the grass, unable to tear himself from the fleeting beauty of his own face. Soon this inability to touch, to connect, to feel the love of the immaterial object of his affection, Narcissus began to go mad. Echo, unable to utter words of her own, retraced Narcissus’ last words with her own voice. In his madness Narcissus pounded his chest until he died. As a pyre is prepared Narcissus’ body disappears. In its place a beautiful flower appears – a Narcissus.

Waterhouse focuses this painting on the crucial moment in the story when Narcissus first sees his reflection and poor, while love stricken Echo wistfully watches him fulfill the prophecy. There is a clear sense of melancholy in all of Waterhouse’s paintings. His figures, heroes of Greek and Roman myths, Shakespearian knights and maidens, (mostly maidens), and even Cleopatra often appear deep in thought, gazing at an undetermined spot, somewhere past the horizon. They float in their worlds, rarely aware of being observed. Waterhouse’s colors are those of Victorian England – rich and textured soft rose, lush greens, golds and blues. Although he is often, mistakenly, assigned association with the Pre-Raphaelites (the Pre-Raphaelite Brotherhood), Waterhouse was a master of Romantic Realism.

A contemporary of Claude Monet and Van Gogh, Waterhouse did not seek alternate means of expression, and instead adhered to strict classical themes and techniques. When Monet was examining space and color, and creating his first all-over compositions of water lilies in Giverny, Waterhouse used the medium simply to retell the well-loved stories. His technique and subjects were closer those of Lawrence Alma Tadema than his French and Dutch contemporaries.

Echo and Narcissus, John William Waterhouse, 1903. It is on display at the Walker Art Gallery in Liverpool, UK.

Also read about Narcissus at the Source by Caravaggio.