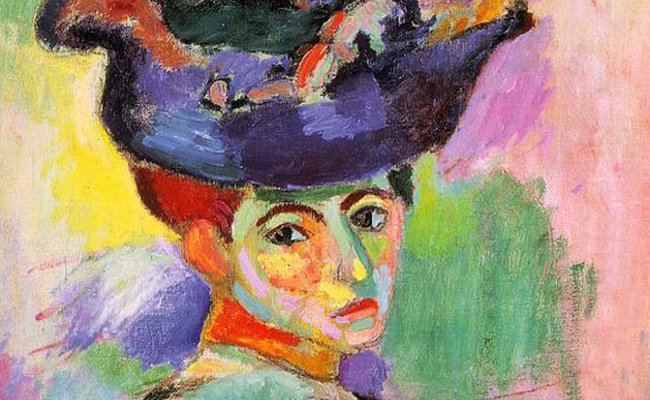 Home › Modern Art › Woman with a Hat by Henri Matisse

Woman with a Hat by Henri Matisse

— What was the color of the dress Madame was wearing while posing for the portrait?

The critic Camille Mauclair said this about the painting: ‘A pot of paint has been flung in the face of the public,’ while Leo Stein, brother of Gertrude Stein, who bought the painting shortly after its first showing described the work as ‘the nastiest smear of paint I had ever seen.’

Ok, so here is the reality: this is a portrait, titled La Femme au Chapeau or Woman with a Hat made by Henri Matisse in 1905 of his wife, Amelie Parayre. She is depicted in an elaborate outfit with classic attributes of the French bourgeoisie: a gloved arm holding a fan and an elaborate hat atop her head. Her costume’s vibrant hues are purely expressive. After the devastating initial reception at the 1905 Salon d’Automne in Paris, Fauvism  as an art movement gained much favor in the art circles, as the art world started to delve deeper into the nuances of the style. Fauvists, or les Fauves  is French for “the wild beasts” – a loosely-defined group of artists in the early 20th century, so named by the critics for their bold use of bright, often unmixed colors they used in their work. Fauvism is considered to be the first art movement of the 20h century.

With the rising popularity of photography ideal representation of the real objects was no longer an objective for painters, who looked towards the interior emotional spaces for inspiration. The bright colors and the loose brush strokes that made the painting look almost unfinished was essentially the artist’s move towards an expressive individual style.  Color was now used for all its material and emotional qualities.