Nature merely supplies us with inert materials. A human mind alone can arrange them in such a way that, through them, it can express its feelings and its thoughts and by means of correspondences. That is how we arrive at style, the ultimate aim of all art.

What you see in this painting is not simply a colorful landscape carefully arranged in bright and saturated colors, but a beginning of a new philosophy. One that places the ultimate emphasis of painting not on the accurate representation of familiar objects within the natural world, but on the painter’s emotions and sensations before nature. A revolutionary philosophical construct and a major departure from the dominant doctrines of the time.

“Sérusier sought to free form and color from their traditional descriptive functions in order to express personal emotions and spiritual truths. As evidence of Symbolism’s liberating possibilities, he offered a nearly abstract sketch produced under Gauguin’s guidance. The Nabis accorded such powers to this work—a loosely handled, brightly colored representation of the Bois d’Amour at Pont-Aven painted on the cover of a cigar box—that it became known as The Talisman.” * Le Talisman was, in a sense the painting that launched the very inception of the group, and represented a revolutionary philosophy in regard to the relationship between color and form. The name Serusier chose because exaltation was to be their constant state of mind. ‘ 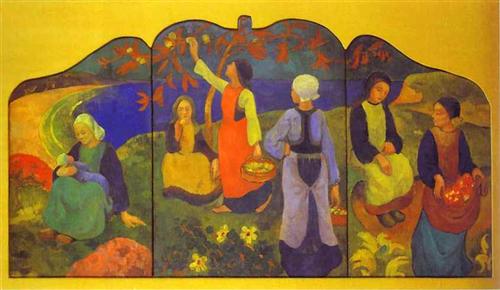 The Nabi abandoned any illusions of depth, intentionally flattening the surfaces and rendering their compositions almost decorative in nature. Japanese prints characterized by their broad planes of unmediated color, thick outlines, and bold patterns were another major influence on Serusier and his followers.

‘The Nabis, the prophets’, wrote Maurice Denis, ‘together with us two, were our comrades Pierre Bonnard, H.-B. Ibels, René Piot, Paul Ranson, Roussel, and Edouard Vuillard.’ Denis later explained the effect Le Talisman had on his fellow Nabi, ‘Thus was introduced to us for the first time, in a paradoxical and unforgettable form, the fertile concept of a flat surface covered with colors assembled in a certain order. Thus we learned that every work of art was a transposition…a passionate equivalent of a sensation received.** 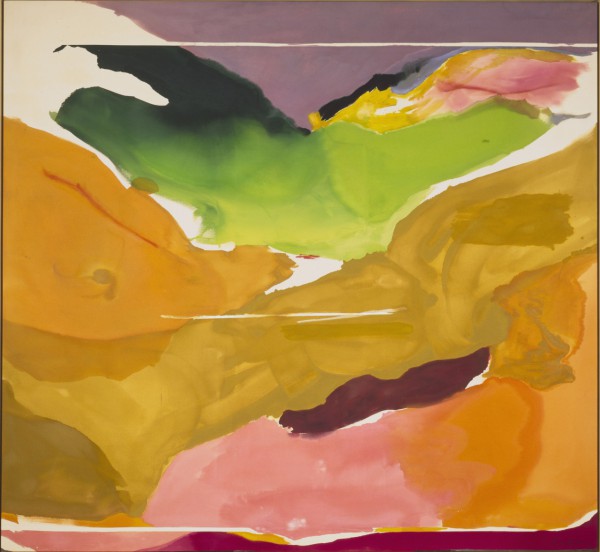 This approach to treating color as a primary vehicle of communicating emotions, rather than accurately rendered figurative elements, would be adopted and further expanded upon by the 20th century  Abstract Expressionists. Revolutionaries in their own right, artists like Hans Hoffman, Helen Frankenthaler, Richard Diebenkorn, Sam Francis, Mark Rothko, and Joseph Albers further evolved the importance of color as means of communicating the emotional state of being.

* Heilbrunn Timeline of Art History, The Metropolitan Museum of Art