José Victoriano Carmelo Carlos González-Pérez, better known as the great Spanish cubist Juan Gris (1887-1927) was clearly ahead of Warhol and Lichtenstein when he painted his “cubism-meets-pop-art” painting Newspaper and Fruit Dish (Journal et Compotier), in March of 1916.

Just like Picasso and Braque, Gris (1887 – 1927), a student of mechanical drawing at the Escuela de Artes y Manufacturas in Madrid, was interested in playing with the idea of dual realities. Here he documents reality by citing a document of reality – a newspaper and represents dimension through unique visual tools. After all, how do you resent a three-dimensional world on a two-dimensional surface? The answer is light! Gris used a uniquely innovative technique to achieve that (colorful dotted fields).

The first abstract movement of the 20th century, this painterly style was first conceived and introduced in France in 1907 by Pablo Picasso and Georges Braque. Juan Gris, often referred to as ‘the third cubist’, refined the cubist vocabulary into his own instantly recognizable visual language. Gris was to go in a slightly different direction, towards Synthetic Cubism, which to a certain degree helped to differentiate his career from the other two artists’. 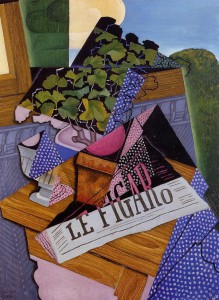 Synthetic Cubism started developing in 1912 as a more colorful than the earlier analytical form of cubism and innovative in it’s use of collage (from the French “coller”, meaning to stick) and papier colles (from the French, meaning pasted paper). If Analytical Cubism was all about the deconstruction of objects, Synthetic Cubism was about their reconstruction or their ‘synthesis’. This process incorporated scraps of everyday materials into the paintings creating more relaxed and playful set of aesthetics. The theory proposed that by introducing physical elements of real life into the artwork, paintings would become more ‘real’. Synthetic Cubism would have notable influence on other important movements such as Dadaism, Surrealism and later, Pop Art.

It was at this stage in the development of Cubism that Juan Gris came into his own as the poet of the movement. A wonderful example of Gris’ famous still lives is Newspaper and Fruit Dish. Gris has used subtle patterns and repetition of shape to create the illusion of texture in this still life. Brighter colors, ornamental patterns and the overlapping of forms that seemed to be cut out and glued to the canvas very well exemplify not only Gris’s body of work but also overall later development of Synthetic Cubism.

The French art critic Louis Vauxcelles first used the term Cubism after seeing the landscapes Georges Braque had painted in 1908 at L’Estaque in emulation of Paul Cézanne. Vauxcelles, who would go on to coin the term Fauvism, called these new geometric forms in the highly abstracted works “cubes.”* Among Cubism’s other stars were Albert Gleizes, Henri Le Fauconnier, and Jean Metzinger.

Newspaper and Fruit Dish is in the Yale University Art Gallery’s collection.