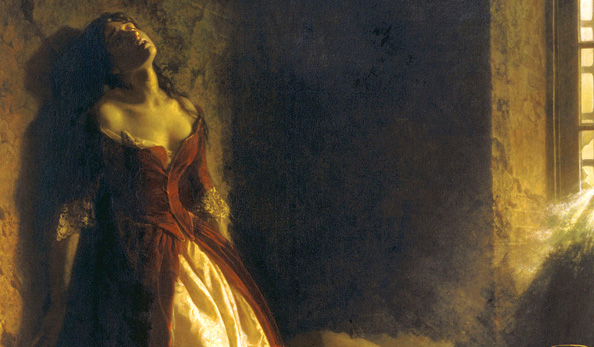 Anyone who has ever come across this painting is unlikely to forget the emotional imagery and a feeling of inevitability depicted in this work.

The story of the Princess Tarakanova, in Russian Княжна Тараканова, has two origins from which the painter Konstantin Flavitsky (1830 – 1866) could have drawn his inspiration. The first tells of an illegitimate daughter of empress Elizabeth the Great, who spent her days in a monastery, under a watchful eye of guards. Her last days would be spent there as well.

The second story entails far more interesting details. During the reign of Empress Catherine II, a beautiful young lady living in Italy but with her sights set on the Russian throne presents herself to the Roman society as a Russian Princess. Catherine II ordered Count Orlov to travel to Italy and bring the impostor back. The Count pretended to fall in love with the “Princess” and enticed her to board the ship bound for St. Petersburg. There she was shackled and taken to the Petropavlovskaya fortress. According to legend, Catherine ordered her imprisoned in a cell that was known to flood each time the waters in the Neva River rose….

Historians have their own reasons to doubt the documentary claims of this painting. According to official records, Tarakanova died two years before the historic flood of September 21, 1777 when the waters in the Neva River rose 310 cm above normal levels.

The painting caused quite a furor among the members of the royal family as the secret of the Countess Tarakanova was closely guarded and here Flavitsky presents the story and its heroine with such great mastery. The painter was subsequently forced to announce that the subject matter was drawn from a novel that was in no way connected to the royal family.

The painting, dated 1864 is in the permanent collection at the Tretyakov State Gallery in Moscow.