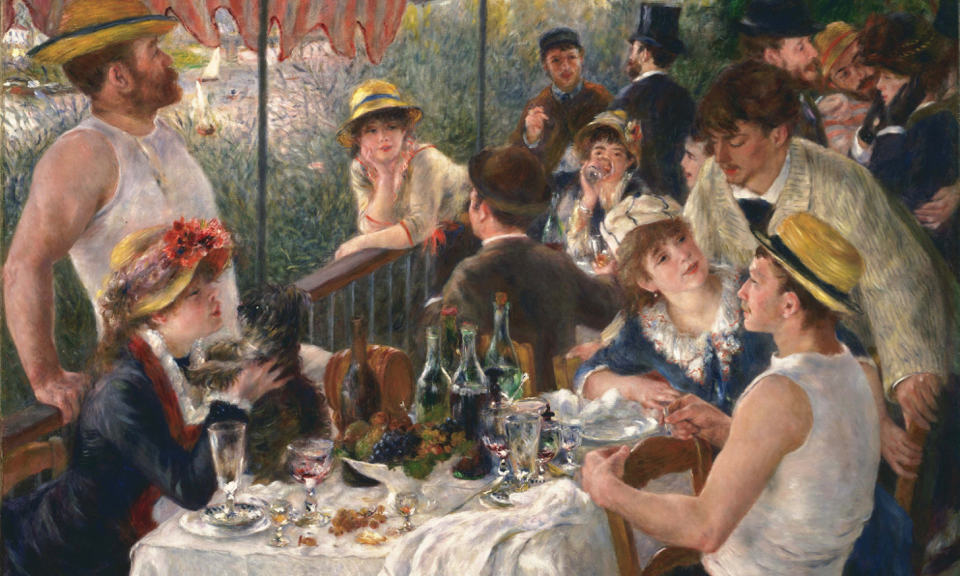 Home › Impressionism › Luncheon of the Boating Party by Pierre-Auguste Renoir

Luncheon of the Boating Party by Pierre-Auguste Renoir

So lively, so fluid, so rich – these are some of the words that best describe Auguste Renoir‘s Luncheon of the Boating Party. This painting allows the viewers to time travel and see the charming atmosphere of the time for themselves.

In choosing to portray the characters in the setting that he did, the artist presented the new Parisian social environment in a fascinating way. How, you ask? Placed against the backdrop of the Seine, at the Maison Fournaise restaurant in Chatou, he has included a former mayor, an actress, a seamstress (Aline Charigot, in the foreground with the dog), a bureaucrat and an Italian journalist – all within the same frame!

If you look closely, you will see the finesse with which Renoir has painted each of his friends, and how he has shown precise expressions of the moment. For example, the trio on the right side – actress Angèle, the Italian journalist Maggiolo and fellow artist, close friend, and wealthy patron, Gustave Caillebotte (seated) – are engaged in a separate conversation, which is apparent both by their stance and positioning. Simultaneously, the woman at the railing (Alphonsine Fournaise, the proprietor’s daughter) is in a separate exchange of sorts with the man turned towards her (Baron Raoul Barbier, former mayor of colonial Saigon).

None of the elements in the painting are isolated, as Renoir created a fluid interactive motion through clever use of light and brush strokes. Look at the light source – beginning at the top left of the painting, it travels diagonally up to the seated man (Caillebotte) and lends a sparkle to everything on its way. A perfect Sunday brunch!

Luncheon of the Boating Party, Pierre-Auguste Renoir, 1880-81, oil on canvas at The Phillips Collection, Washington, DC