“…the creation of new forms, an extending and deepening of the problems of color. This will help me to express contemporaneity—its living beauty—better and more vividly.”

Natalia Goncharova was one of the most important figures in the inception and development of Russian Modern art in the years immediately preceding the 1917 Socialist revolution. A figure of great controversy and vision Goncharova was more a beacon of innovation than merely an artist (in its technical definition). Her name is often mentioned together with Mikhail Larionov, her collaborator and  partner of 60 years and together they experimented with the contemporary French and European styles, and in the second half of 1912 brought forth a unique fusion of Cubo-Futurism and Orphism they called Rayism.

Rayism focused on depicting not the real state of being of material objects – in other words, not the way we would actually see a tree or an animal, but the rays (thus the name) of light reflecting from its surface. This revolutionary approach was largely influenced by the advances in the study of light and vision. As scientists discovered the real mechanisms in the perception of light by the human eye, Goncharova and Larionov found new ways of depicting these findings on canvas. 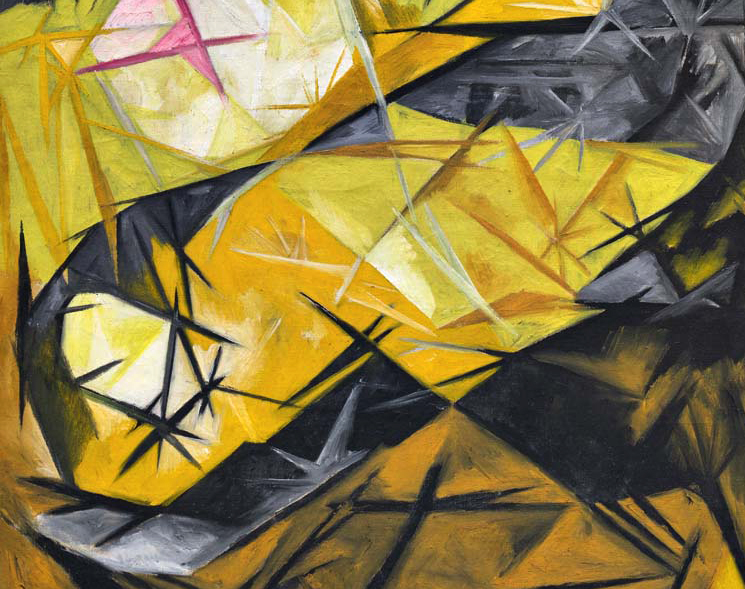 Jennifer Blessing of the Guggenheim Museum wrote: “Using intersecting vectors of color to depict refracted light rays, Rayist works recreate the surface play of light on objects. This perceptual approach to painting was based on scientific discoveries concerning the nature of vision, advances that had also influenced Neo-Impressionist color theories, the Cubist analysis of form, and the Futurist emphasis on dynamic lines. […] Goncharova used darts of color to suggest the effects of light on the cats’ shiny coats and the way that adjacent surfaces reflect neighboring hues. The dynamic slashes of black and white evoke the energized, machine-inspired compositions of the Futurists.”

The vivid colors recall Sonja Delaunay‘s Orphist paintings and traditional Russian painted wooden trays but utilize new tools and language. Many of Goncharova’s Cubist and Rayist works can be seen at the Tretyakov State Gallery in Moscow.

Cats by Natalia Goncharova is in the permanent collection of the Guggenheim Museum in New York. The painting was also part of the exposition “Inventing Abstraction” at the Museum of Modern Art in 2012.