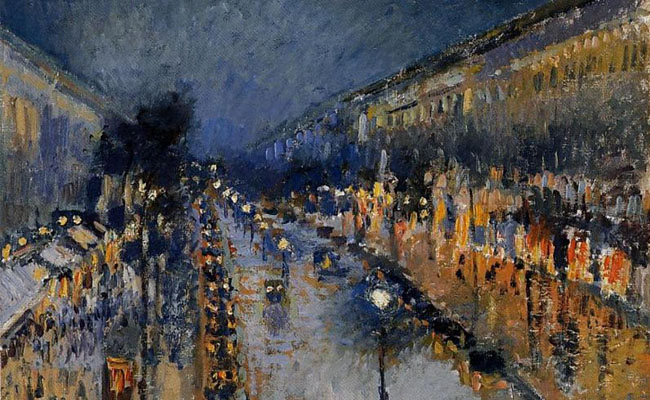 Home › Impressionism › The Boulevard Montmartre at Night by Camille Pissarro

The Boulevard Montmartre at Night by Camille Pissarro

“Painting, art in general, enchants me. It is my life. What else matters? When you put all your soul into a work, all that is noble in you, you cannot fail to find a kindred soul who understands you, and you do not need a host of such spirits. Is not that all an artist should wish for?”

This painting is not simply a Parisian street, but an impression of the street and all its comprising elements. It is a depiction of Paris’ bright new identity as the center of European architecture and city planning assumed after the famous city-wide restructuring by Baron Georges-Eugène Haussmann. 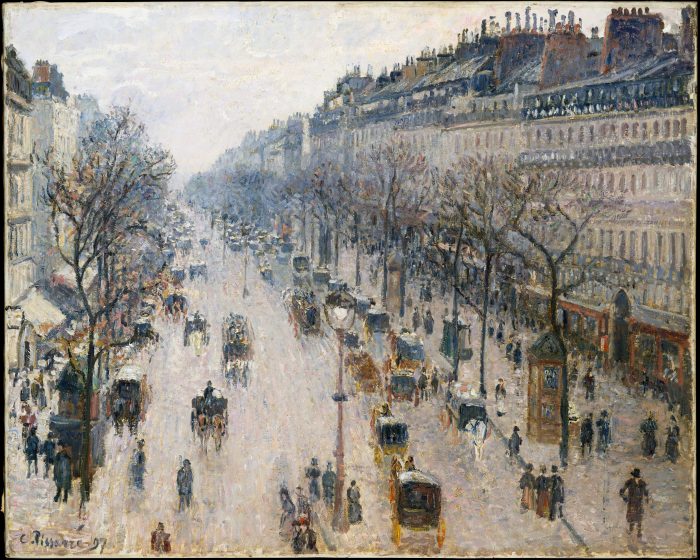 The grand redesign  was commissioned by Emperor Napoleon III as a way to solve two problems at once:

“From 1800 to 1850 the population of Paris doubled to become over one million. This rapid growth put great strain on Paris’s infrastructure and resulted in a massive overcrowding problem. In 1850 the majority of Paris was still the medieval style of unplanned  narrow winding streets as seen in the picture to the right. These streets featured open gutters for carrying sewage that were breeding grounds for disease. These unplanned streets were narrow, often had confusing layouts and were not efficient for commerce and traffic.

There were also political reasons for the renovation. From 1790 to 1850 France had transitioned between Royal dynasties, Republics, and Empires six different times! At this point revolutions seemed to be the fate of every French Government a fate that Emperor Napoleon III was keen to avoid. Paris was the focal point of revolutionary movements and by this point Parisian barricades had become synonymous with revolution. Napoleon III realized that the narrow streets of Paris were easy to barricade and the winding disorganized layout made it difficult for troops to quell rebellions quickly. Therefore it was hoped that by with the new layout providing quick access for troops and broad streets discouraging barricades, future revolutions could be avoided.” *

The transformation from the medieval city to a modern metropolis didn’t take place without major controversy, but the new Paris quickly became a favorite subject of many French painters, Pissarro included.

Pissarro painted this iconic urban view of the The Boulevard Montmartre as he saw it from his hotel room at the Hôtel de Russie on the corner of the Boulevard des Italiens and the Rue Drouot. The artist, who was then working on a series of city views of London, Paris, Rouen, Dieppe, and Le Havre, checked into the hotel in February 1897 and produced a series of paintings of the Boulevard at different times of the day. He was quite impressed with the boulevard and the fact that not only could he “see down the whole length of the boulevards” but he had “almost a bird’s-eye view of carriages, omnibuses, people, between big trees, big houses that have to be set straight.”

The Boulevard Montmartre at Night is in the collection of The National Gallery, London.

* Baron Haussmann and the modernization of Paris.