The global art world is already descending onto Venice as the various palazzos, churches, cathedrals, open squares, luxury retailers, cafes and gallery spaces finalize their displays and installations and get ready to welcome the crowds attending the opening galas.

galleryIntell is proud to bring to your attention several of the artists recently profiled in our video interviews who have been chosen to show there works at the upcoming Venice Biennale. 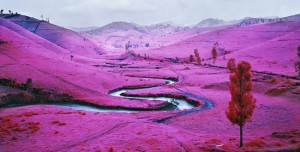 Richard Mosse will be representing Ireland at The Enclave, Irish Pavilion. His captivating photographs of the Congolese rural landscapes caught our attention at the recent Armory Show in New York. Mosse’s large scale photographs can be easily distinguished for the vivid reds, pinks, fuchsias and blues the artist achieves by using a rare and discontinued Kodak Aerochrome III Infrared film that reacts to chlorophyl, the chemical that gives plants their green color. The film was first designed for use in the US Air Force to use in surveillance. 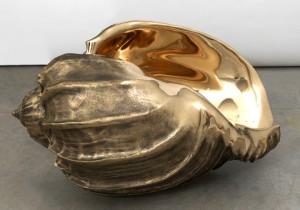 The recently profiled British artist Marc Quinn, most famous for his introverted look at and into his own body for inspiration will be shown at the Giorgio Cini Foundation. The exhibition opens on the island of San Giorgio Maggiore and will run alongside the 55th Venice Biennale.

The exhibition will feature a unique site-specific installation of the work Evolution (2005) that has been specially adapted for the island of San Giorgio as well as seven large scale seashells (see image on the right) .

Marc Quinn is currently the subject of a solo exhibition at Mary Boone Gallery in Chelsea where a sparse grouping of four large scale bronze sculptures of different species of sea shells are on view through June 29. 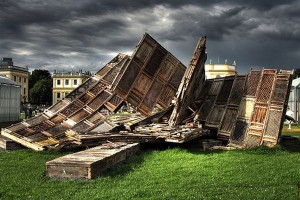 The way the 6-month-long city-wide exhibition is organized is essentially by country pavilion and each country’s designated curator selects one or several artists to represent his or her country. The event is still regarded as the preeminent venue for showcasing each country’s top innovators in the arts, including painting, sculpture, video, cinema, dance, performance, architecture and conceptual arts, and allowing artists from all disciplines to engage in discussions and further their . It is considered a privilege to have your work chosen for the Biennale and can be a huge boost to an artist’s career and often increase the base price level of his or her works. In the recent years other countries and cities have launched their own versions of the famous Venice Biennale, but so far none has reached its level of prestige and scope. The 55th edition of the Venice Biennale is set to open Saturday, June 1 and will go on until November 24, 2013.