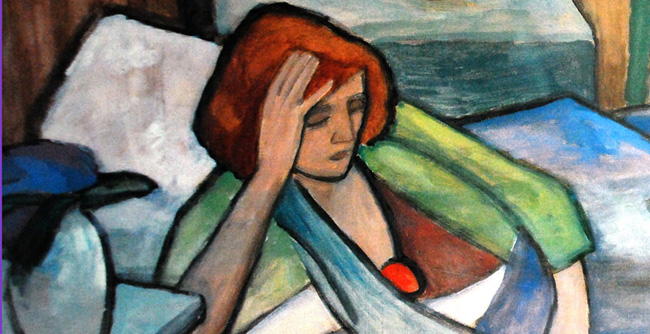 “My pictures are all moments of life – I mean instantaneous visual experiences, generally noted very rapidly and spontaneously. When I begin to paint, it’s like leaping suddenly into deep waters, and I never know beforehand whether I will be able to swim.”*

Gabriele Munter went on to say that “it was Kandinsky who taught me the technique of swimming. I mean that he has taught me to work fast enough, and with enough self- assurance, to be able to achieve this kind of rapid and spontaneous recording of moments of life.” Interesting metaphor, isn’t it? The physical process of painting likened to the rigor, the effort and the excitement of swimming.

This prominent member of German Expressionism was born in Berlin in 1877 but spent most of her creative career in Munich and Murnau. Gabriele Munter became one of the most important figures in the conception and development of the Western European art traditions. Famous for her 12-year-long relationship with Wassily Kandinsky, (1902 – 1914) Munter, subsequently developed her own visual vocabulary and produced many landscapes (her subject of choice), portraits of women in simple interiors but unlike her mentor and lover, no abstraction. Along with Franz Mark and Kandinsky in 1911 Gabriele Munter was one of the founders of the Der Blaue Reiter, or The Blue Rider movement.

Cezanne, Kandinsky, Matisse and Marc are all clear influences in Munter’s work – from brushwork that was accented rather than concealed, to composition – reduced to two-dimensional planes and simple outlines, to minimally blended color palette, Fauvism and Expressionism were the principal in informing Munter’s work. In fact, this painting is a great example of all of these influences.

Apart from the Die Brücke in Dresden, the Blue Rider was the most important German group of artists of the 20th century. The movement included, among others the painters, Wassily Kandinsky, Franz Marc, August Macke, Gabriele Münter, Alexej von Jawlensky and Paul Klee.

Shortly before her death Munter presented the city of Murnau with 120 works by Kandinsky and 60 of her own paintings.