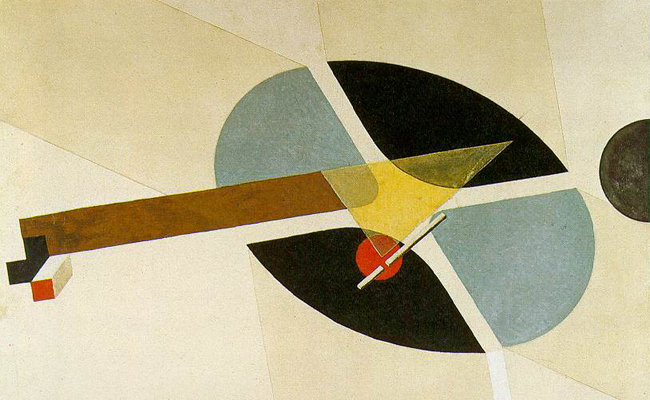 It’s the utopian urban landscapes first imagined at the start of the 20th century. The then-Imperial Russia led the way with bold new ideas of urban architecture and El Lissitzky was at the avant-garde of this inspired new movement called Russian Constructivism.

El Lissitzky, born Eleazar Mordechai Lissicky, would later work with Marc Chagall and Kasemir Malevich at UNOVIS – Affirmers of New Art – on developing and promoting Suprematism as the ultimate form of non-objective art. He is also one of the first artists to include letters in his graphic compositions, an idea first introduced by the Surrealists as a way of equating the process of drawing a letter to that of fine art drawing. Later this technique was assimilated into wider artistic practices.

Picture with Circle by Wassily Kandinsky

This is “PROUN G7”. A mysterious-sounding name that in Russian means “approved new projects” (ПРОУН – Проекты Утвержденного Нового) refers primarily to the new ideas in architecture and industrial design. Everything from the exteriors of the new public buildings to theater design, to consumer objects were to be conceived of in a new light. New lines and sensibilities of the new century were at the core of the movement with these pure geometric forms leading the way to the future. Lissitzky completed this work in 1923 and would go on experimenting with form and spacial positioning of objects within a two-dimensional plane. He is one of the artists featured in MoMA’s Inventing Abstraction exhibition.