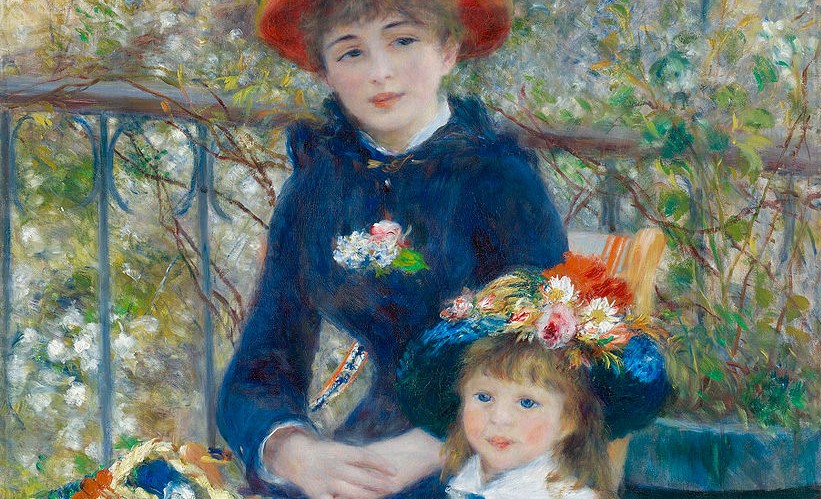 The girls in this painting titled Two Sisters are not actually sisters! They are young models Pierre-Auguste Renoir used for the painting. Look at the painting for a while longer and the very essence of Impressionism becomes vividly clear, its variegated composition and vibrant background. The beauty of this painting is also in the feeling you get of having just stumbled upon these two girls as they sat on a terrace, perhaps waiting for someone, perhaps just resting…

From the State Hermitage Museum:

“It is not known who posed for the younger “sister”, but thirty years ago François Daulte, an expert on Renoir’s work, established that the older girl was Jeanne Darlot (1863–1914). She was eighteen at the time. Soon she joined the Théâtre Gymnase where she acted supporting roles in comedies. The attractive actress quite often had her photograph in the papers. A decade later Jeanne Darlot had her début at the Comédie Française, but soon after she quit the stage. Evidently her theatrical career was not shaping the way she wanted. She did not marry either, becoming the kept mistress of a chocolate manufacturer, and later of an influential senator.

It is a special quality of the heroines of Renoir’s paintings that they both resemble and do not resemble the models. Comparing photographs with the portraits it is obvious that in paintings they are immeasurably more attractive. Renoir’s pictures are first and foremost paintings, and only then the motif or the personage.”

Renoir’s composition is metaphorical in nature. The child looks straight at you with her beautiful blue eyes. It’s almost as if Renoir wanted to imply the innocence of the childlike view that she has of the world at that age. Her elaborate flowery hat captures attention. The older girl has a faraway gaze and an almost unreadable expression.

“It has been suggested that the balls of wool appeared as Renoir’s response to the insinuation of a critic who compared his painting to knitting. One of his masterpieces was described as “a weak sketch seemingly executed in wool of different colours”. On the other hand, Degas wittily recalled the balls of wool. “Renoir,” he said, “can do whatever he likes” and added, thinking of the wholly non-programmatic nature of his colleague’s art, “You’ve seen a cat playing with balls of different colored wool?” – State Hermitage Museum