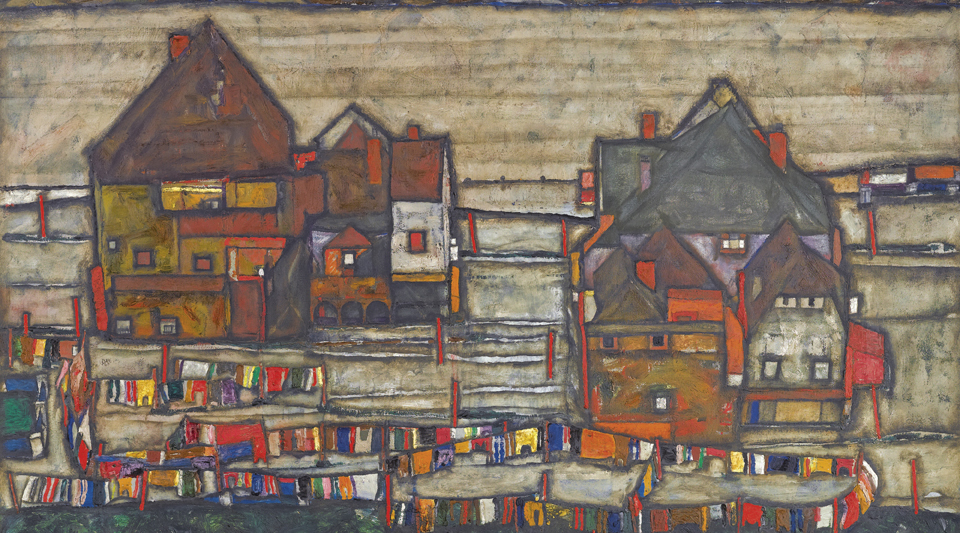 Houses with Laundry by Egon Schiele

Egon Schiele is probably best known for his provocative nudes and deeply revealing self-portraits, but among his works landscapes and townscapes define him as one of the absolute masters of the genre.

Painted in 1914, Houses with Laundry, or Häuser mit bunter Wäsche (Vorstadt II) is one of Schiele’s most impressive and important townscapes. Two simple, almost festive wide-front structures set against a receding landscape face the viewer. The composition is flat – there is essentially no foreground or background – all objects appear to be at the same distance from the viewer. The painting is almost a schematic. In addition, Schiele doesn’t give us any specific indication of the exact location of these houses, we can only assume that because of his deep emotional and family connection the artist based this composition on the houses he saw in an old town of Krumau. Jane Kallir wrote: ‘Schiele’s favorite landscape subject […] was the town of Krumau (today Cesky Krumlov), to which he referred most frequently as the ‘dead city’ (but also as the ‘old city’ and the ‘city on the blue river’). Krumau, his mother’s birthplace, was indisputably an old city, a medieval time capsule whose winding streets and crumbling buildings embodied for Schiele an eternity of human decay and persistence. ‘

Take your time examining the painting and you soon will realize that the reason Schiele didn’t identify the town was because he was far more interested in depicting his emotional response to a given place rather than the place itself. Klaus Albrecht Schröder wrote ‘The houses of Schiele’s Krumau are empty of people. Seen from above, they are an embodiment of the human presence, but even the traces of that presence, such as clothes lines or open shutters, do not connote the inhabitants, who are absent. These views embody a human presence only in the highly significant sense that Schiele projects his own states of mind onto them as he does onto nature.’*

The elevated perspective of Houses with Laundry would be the preferred angle for the artist for many of his subsequent landscapes and portraits. For example in Sitting Female Nude with a Yellow Blanket you will notice that the figure appears slightly lower than the viewer. We seem to be looking down upon her as if we are standing on a ladder.

The first owner of Häuser mit bunter Wäsche (Vorstadt II) was Heinrich Böhler (1881 – 1940), an heir to the Böhler‐Werke steel‐producing factories.  Böhler bought a significant number of paintings in 1915, and paid Schiele a monthly stipend of 200 kronen during the war years. Heinrich Böhler, along with his cousin Hans, an artist in his own right, was a painting companion of the artist and they often went on painting excursions to Krumau.**

In May of 2011 the Leopold Museum sold this paintings, through Sotheby’s New York to help raise the $19 million it agreed to pay the heirs of to Lea Bondi Jaray, a Viennese gallerist for the right to keep the 1912 “Portrait of Wally”, a work that has been in the center of a very public restitution case. 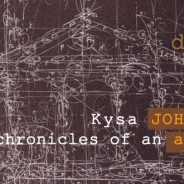