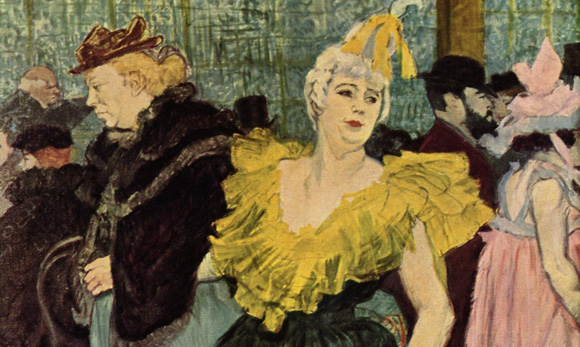 We all know Toulouse-Lautrec‘s caricature-esque portrayals of the dancers and patrons of the Moulin Rouge, but here is a lesser-known portrait of a famous Parisian clown/dancer with a Japanese-sounding name Cha-U-Kao Lautrec finished in 1895.

The dancer Cha-U-Kao was one of Toulouse-Lautrec’s favourite models of the mid 1890s. She derived her nickname from the sensational chahut (an acrobatic dance derived from the cancan) and “chaos” referring to the uproar that occurred when she came on stage. Toulouse-Lautrec often returned to the same characters that frequented the Moulin Rouge. Cha-U-Kao, like the famous performer Jane Avril, a can-can dancer Louise Weber, who went by a stage name La Goulue, is a recurring figure in the painter’s work and belongs to the world of Parisian showbiz of the late 19th century. Her work as a clown and sometimes even an acrobat nonetheless brought her closer to the circus tradition – which also fascinated the painter – than to the cabarets. Here Cha-U-Kao is shown as a full-figured, middle aged woman with bright yellow ribbons and ruffle. Look at the  figures behind her – she is the only one in costume…

Toulouse-Lautrec depicted the clowness Cha-U-Kao in a variety of poses, but always in the same outfit. Here is a lithograph of a more famous work titled The Seated Clowness or The Seated Female Clown from The Metropolitan Museum’s collection.