“It is a magic word, circus, a timeless dancing game where tears and smiles, the play of arms and legs take the form of a great art.” – Marc Chagall

Chagall’s love and appreciation of the circus came from a childhood event he witnessed in his hometown of Vitebsk. There on the town square an impoverished family performed all kinds of strenuous acrobatic stunts, trying as best they could, to earn a few coins for food. The residents walked by unimpressed and soon the family packed up and left without much money. This incident stayed in his mind as he understood that this could have been the fate of anyone who called himself an artist. He wrote: “It seemed as if I had been the one bowing up there” (from Chagall’s 1967 text Le Cirque). 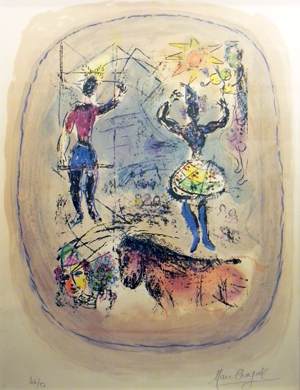 “From early on and ever after, Chagall would invariably associate this girl of exceptional abilities with his feelings of longing and desire. Chagall’s first teen love in Barcelona was the circus equestrienne Rosita. The young woman who would eventually fill his life in all the ways he was seeking was Bella Rosenfeld, his beloved first wife, whom he married in 1915. Their rapturous union ended with her death in 1944, but even after his second marriage in 1952, Bella remained the artist’s eternal bride.

Chagall, in order to emphasize the fact that this painting is in every way a gift to Bella from him, of him, depicts his beloved bare-back rider in a most unusual way – he has exchanged places with her, so that he is now à cheval and she has become the admiring on-looker who lovingly appreciates his act…“* Here in Au Cirque, in this jubilant kaleidoscope of vivid yellows, reds, purples and blues, the rider, separated from the rest of the composition by the column of yellow light, is a boyish clown, striding a horse, his head unnaturally horizontal on his shoulders, his body without a costume.

Chagall painted his circus series in two sets, nineteen gouaches in all, which became known the Cirque Vollard. The artist based many of these works on sketches he drew while enjoying the spectacle of the Cirque d’Hiver. The sheer exhilaration of these pictures, their unalloyed joy and life-affirming spirit, contrasts sharply with the somber clowns and circus queens of Rouault, another artist who produced illustrations on the circus theme for Vollard.*