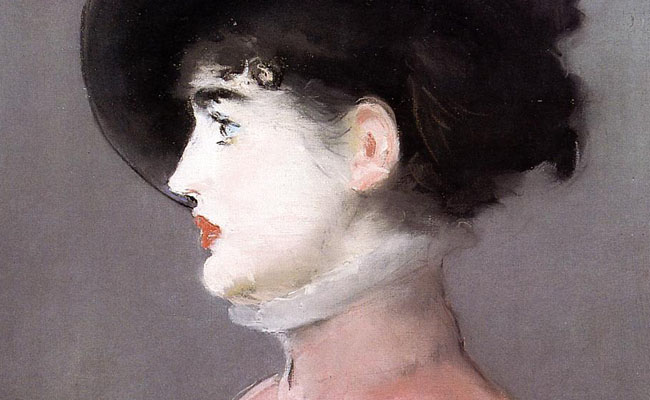 Pierre-Auguste Renoir observed that Manet was as important to them “as Cimabue or Giotto were to the Italians of the Quattrocento.” *

This is probably Edouard Manet‘s finest pastel portrait (click to see the full image) – one of a series the artist completed between 1879 and 1882. The most striking of the group, this composition is easily distinguished by the contrasting colors as well as the sharp, yet sensuous and gentle profile of the model. Look carefully at the composition and the overall color scheme, does it remind you of another famous, or should we say, infamous, masterpiece?  Is it possible that John Singer Sargent was influenced by this portrait of Irma Brunner when the following year in 1883 he began his Madame Pierre Gautreau, or as it’s better known Madame X? The tell tale sign here is the pink ear against the chalky white of the face, the high contrast of the remaining elements: the black hair, the monochromatic background, and the sharply outlined profile. Granted, of course both artists could have just been capturing fashion trends of the time without a direct reference or allusion to one another, but the question is worth asking.

See Manet’s Luncheon on the Grass.

For his portrait of Irma Brunner Manet chose pastels for their powdery texture which produced a highly flattering effect  in portraiture, something difficult to achieve with other media. Her face looks almost wind swept, her complexion a perfect marble-white of high society As you look at this portrait, think of the spacious Parisian and Viennese, (the painting’s full title is  La Femme Aa Chapeau Noir: Portrait d’Irma Brunner la Viennoise) salons with beautiful music trailing from the drawing rooms, all the colors, sounds and scents of the era, the sun-filled painter’s studio and that exact moment she sat posing for the artist.

Manet, like many other artists of his time was keenly aware of the new possibilities for replicating reality offered by the new medium of photography and made a conscious choice to find new ways of communicating his vision. That’s why more and more often you see distorted features, unnatural proportions, colors and so forth. It wasn’t that they suddenly lost their ability to replicate reality – it was that it was no longer necessary and artists were looking for a different  directions for advancing their ideas.

Speculations abound about the true identity of the sitter, but we are fairly certain that Irma Brunner was a friend of Manet, whom the artist invited to model for the portrait.