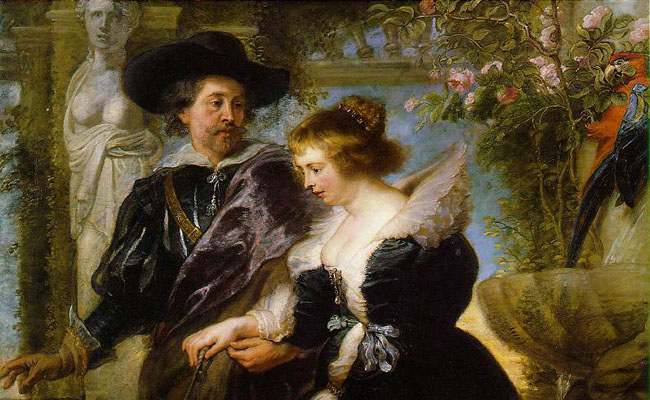 Rubens, His Wife Helena Fourment, and Their Son Peter Paul

A master painter of the Northern Baroque Peter Paul Rubens, born in 1577, is famous for imbuing his portraits with layered symbolism.

Every single element, from the parakeet in the top right corner, a symbol of the Virgin Mary and thus of an ideal mother-figure, to the color of the little boy’s sachet are specific references easily recognized and identified in the 1600’s. Like many of his contemporaries, Rubens focused much of his work around religious narratives and ancient mythology, but didn’t restrict himself to folklore.

Rubens was interested in the effects of time (a prevalent focus in Rembrandt‘s numerous self-portraits) and subsequently recorded his own aging process in many studies and fully-executed self-portraits. Here he shows himself as a middle-aged man, still very much the central point of the composition, his gaze directing the viewer to the female figure – his second wife Helena. Notice the position of authority and protection in the way he positioned himself in relation to his very young wife and their child.

From the Metropolitan Museum of Art: “Rubens married Helena Fourment on December 6, 1630, when he was fifty-three and she was just sixteen. Helena became the model and the inspiration for many paintings by Rubens from that point on, particularly those dealing with themes of ideal beauty or love. The present composition was considerably revised during execution to shift the emphasis from Rubens, as the dominant half of a courtly couple, to Helena, as ideal wife and mother. The parrot, long a symbol of the Virgin Mary, suggests ideal motherhood, while the fountain, caryatid, and garden setting imply fertility and recall Rubens’s own garden in Antwerp, where he frequently escorted Helena.”