“Today we are searching for things in nature that are hidden behind the veil of appearance… We look for and paint this inner, spiritual side of nature.”

Reh im Klostergarten (Deer in Monastery Garden) is one of several groundbreaking paintings Franz Marc produced in 1912 and 1913. In this series the deer, often vulnerable and fragile, are tightly wrapped by their natural environment. Yet that environment is anything but nurturing and protective.

In the other paintings in this series Reh in Wald II (Deer in a Forest II), Reh (Deer), Tierschicksale (The Fate of the Animals) all completed within these two years, Marc encapsulated the central ideas of his work: fragility of life, innocence and suffering in the face of an upcoming apocalypse. In his “holistic” view of the universe these vulnerable beings are rendered among fractured spheres, semi-abstracted figurative objects, and stacked sharp geometric forms that recall Robert Delaunay and the Italian Futurists. (Marc had just seen the Italian Futurist art at the Der Sturm Gallery in Berlin and incorporated the abstracted force-lines into his own work)

Merging dynamic abstract elements the deer stands in the center of this painting and symbolizes the innocent victims threatened by a vast unknown disruptive force. His paintings became prophetic of the approaching horrors of World War I, which would claim Marc’s own life. “They became the warning of an impending apocalypse he believed would mark the new age of the Spirit. If his Blue Horse was the symbol of the upcoming age, the deer was the image he used for the necessary sacrifice of innocence that would have to precede it.”* 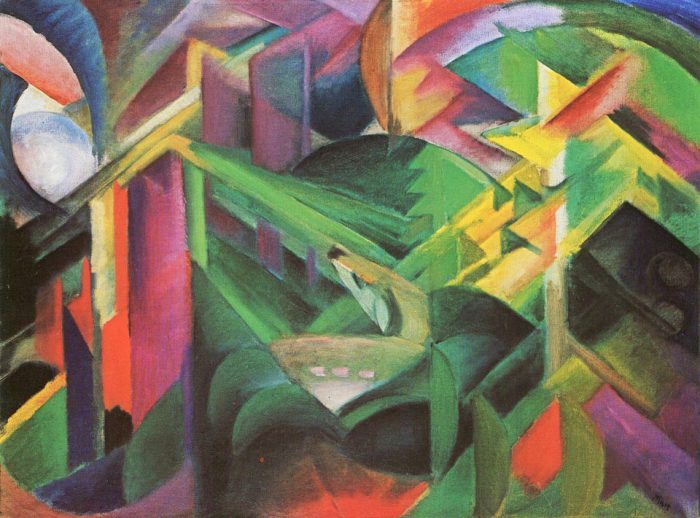 In this painting, Marc injects the deer into the surrounding environment making it difficult to separate the two. The two elements now exist in a shared space. One contains the other. One exists within the other. For Marc the deer becomes the symbol of  interdependence between the animal and his landscape, and the holistic universal nature of all things is expressed in this painting through a series of abstracted natural elements.