Home › Impressionism › The Gare Saint-Lazare: Arrival of a Train by Claude Monet

The Gare Saint-Lazare: Arrival of a Train by Claude Monet

“Monet is only an eye, but my God what an eye!” – Paul Cezanne

‘The Gare Saint-Lazare: Arrival of a Train’ painted in 1877 is considered to be one of the iconic Monet painting because here the artist depicts signs of industrial revolution – an event that forever changed European society and was the cause of fundamental changes in all aspects of European life, including the arts.

This is the largest of the 12 paintings Monet created that year, and while the subject remains unchanged throughout the series, the light, the angle and the palette he used vary greatly with each painting. You can see some of the other iterations at the Musee d’Orsay, The National Gallery in London, The National Gallery of Art in Washington, D.C., the Art Institute of Chicago. 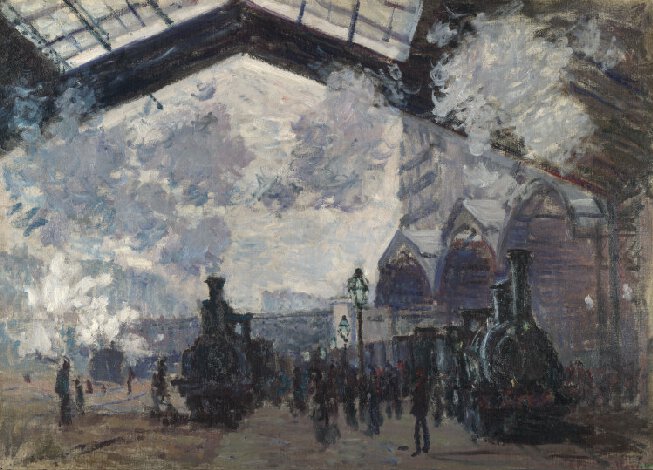 Claude Monet, ‘Gare Saint-Lazare’ 1877. In the collection of The National Gallery, London 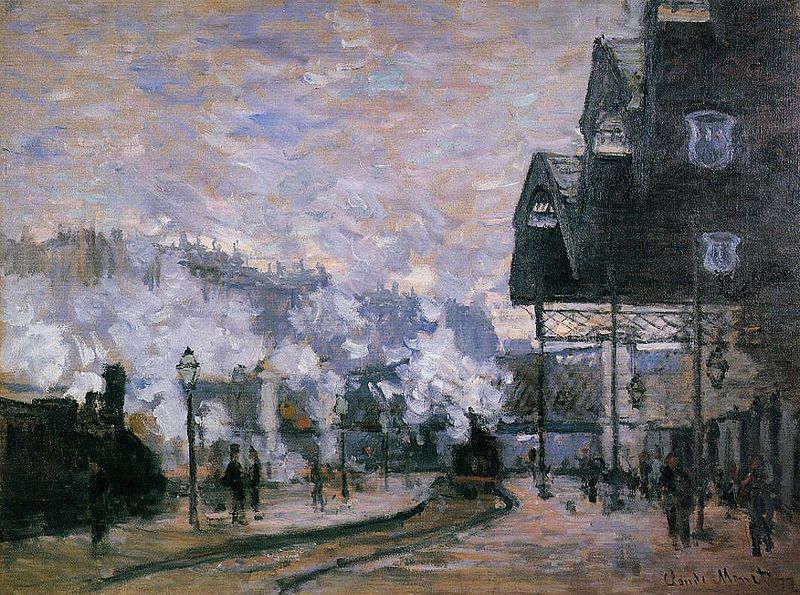 When he painted The Saint-Lazare Station, Monet had just left Argenteuil to settle in an apartment near the terminus station.

“He worked on all the paintings at the same time, and sometimes he leaned the stretched canvases against each other while the paint was still wet. This caused the cork spacers on the backs of the stretchers to be pressed into the adjacent paintings, creating circular indentations in the surface that are visible along the top edge of this work. Monet’s thick build-up of pigments here is a virtuosic example of his approach to painting during this period, when he juxtaposed multitudinous hues in mounds of impasto that would blend into a coherent whole only when viewed from a distance.” *

His other famous series include waterlilies, haystacks, views of London’s Parliament building and the River Thames. These series were frequently exhibited in groups—for example, his images of haystacks (1891) and the Rouen Cathedral (1894).

The House of Parliament, Stormy Sky by Claude Monet

Oscar-Claude Monet (born November 14, 1840, Paris, France—died December 5, 1926, Giverny), was one of the founding members of the loosely associated Impressionist group. In his mature works, Monet developed his method of producing repeated studies of the same motif in series, changing canvases with the light or as his interest shifted. Monet became one of the most famous painters in the second half of the 20th century following a number of traveling exhibitions that not only showcased his paintings, but offered a wide range of commercial products featuring his art.

*From the Harvard Art Museum gallery notes on the painting.