It requires a certain amount of concentration, curiosity and geographical knowledge to fully appreciate the work of Nikki Rosato, a New York-born, Boston-based and New Orleans – represented artist. But that’s nothing compared to the intensity, accuracy and concentration it demands of the artist. Nikki Rosato cuts into road maps like a sculptor cuts into stone – slowly, precisely and methodically, revealing a lacework of familiar silhouettes: full scale figures, busts and heads. Rosato arrived at her current technique after discovering a box of old road maps at a university book shop. Suddenly she saw that the yellow, red and black serpentines of roads and highways, the blue ribbons of rivers meandering through the map “mimicked” the arteries and veins running through our own bodies.

She had been tracing the lines on her own body for her previous body of work, so it was only a matter of time before the correlation became apparent. She realized that just like blood vessels carry information through the body, so do roads and rivers depicted on those road maps. The symbolism and similarities were too obvious to her not to explore the medium further.

We talked to Nikki during her solo booth exhibition at the 2015 installation of VOLTA New York fair where she was represented by the Jonathan Ferrara Gallery.

Here is the transcript of the video interview: 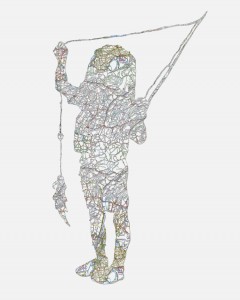 Nikki Rosato: Prior to doing the work with the road map I was working on a series where I was re-drawing every line on the surface of my body. Fingerprints, footprints, the wrinkles around my eyes and in the midst of that project I stumbled across a box of used road maps. When looking at the maps I instantly had an inspirational moment when I saw something very human within the lines of the road map itself. The rivers and the roadways mimic the lines that not only cover the surface of our bodies but also our internal makings. Such as veins and arteries – the things that make us alive and human. And the map is mapping out these places, these locations are also very much alive, just as we are alive.

What I do, is I basically dissect the roadmap for only the lines, so I’ll use a tiny exact-o blade and cut away piece by piece all of the land masses, leaving only the roads and rivers behind. In the end it’s kind of creates this delicate lacy structure. And the people that I’m representing in these pieces are the places that are very important to these people specifically. 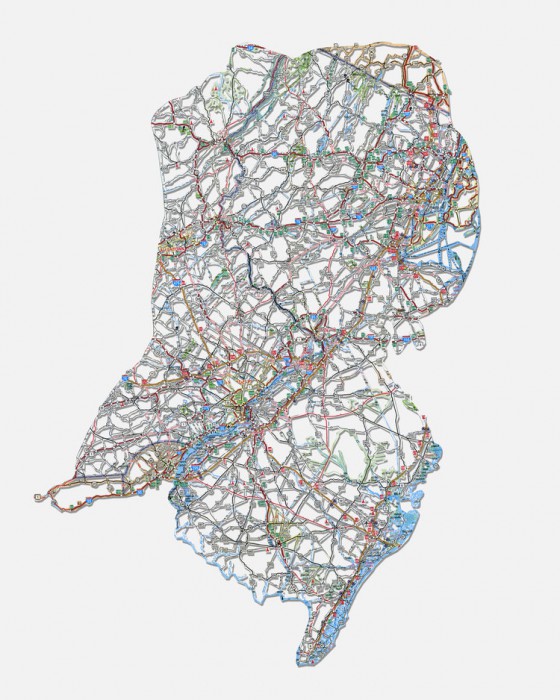 So, when I use myself as a model, for example, in this work, I am using a place that is important to myself – part of my own history, my own journey. A place that has an impact on who I am as a person today. So this one, for example, is of NYC and NY in general, where I was born, so it’s an important part of my story, and my journey. 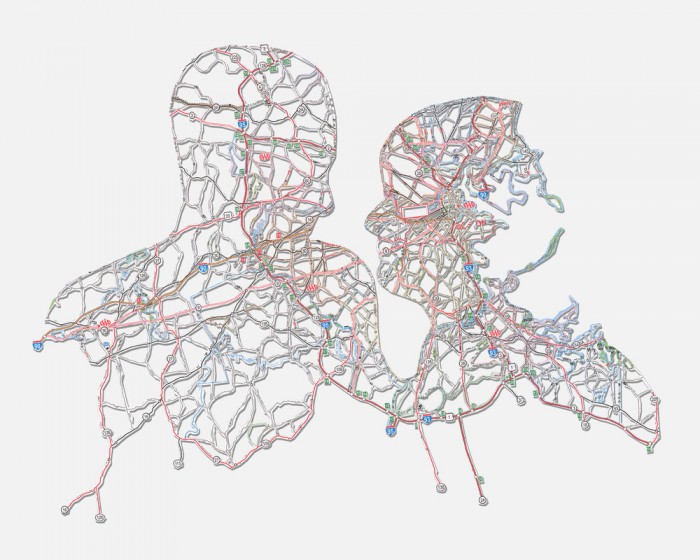 I also work with friends, family members to create individual portraits. I’ll talk to them, interview them as to which place best represents who they are as a person. I’ll take their photo and then make their portrait out of that place. So, for example, San Francisco, where this girl was born, or Brooklyn, NY. Detroit, MI – it’s often the places, where people have started and began their life journey.

This video and article © galleryIntell. Images © Nikki Rosato and courtesy of the artist and Jonathan Ferrara Gallery, New Orleans.