Home › Articles › Conversations with Experts › On Seeing Music in Art

Almost all of the art referenced in this essay are works that are on view now in New York City (please see the footnotes for more information) As the great LeVar Burton would say: You don’t have to take my word for it…

I improvise my pictures as a musician improvises music – Francis Picabia, 1913

In the recently closed Whitney Biennial, curators Anthony Elms and Stuart Comer included works by artists Academy Records and Matt Hanner, the collective My Barbarian, and Sergei Tcherepnin, each in one way or another incorporate music into their practice, highlighting the collaborative and co-inspired relationship between music and art. Considering the field of sound art and the relationships between artists such as Andy Warhol and the Velvet Underground, or Mike Kelley’s early participation in the punk group Destroy All Monsters, the important relationship and blurred boundary between music and art is already widely viewable.

This article focuses on how the spirit of music manifests itself in the field of abstract painting, with a particular appreciation for how it may resonate through an artist’s use of gesture, shape and color choices. Understanding and developing a sensitivity towards the musical context and inspiration behind the works of artists such as Kandinsky, Klee and Mondrian present yet another facet to appreciate their work and a starting point to enter into the paintings of several contemporary abstractionists. 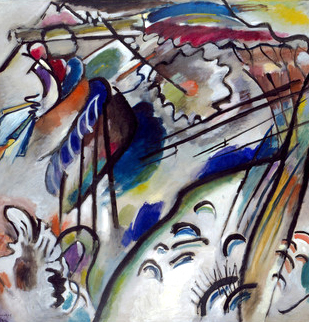 The argument for the importance of the relationship between music and art was advocated early on by Wassily Kandinsky in his 1912 text Concerning the Spiritual in Art, which emphasized the expression of the spirit though the use of color and shape. In Improvisation 28 (1912) deep jets of black jut across, hugging edges of brilliantly applied color. While yellows and muted pinks seem to recede to lower, less dramatic sound, the volume of the reds and blues signify the lush boom of a full orchestra. Listening and corresponding with the composer Arnold Schoenberg (also an accomplished painter), the two artists discussed the importance of creating a new system for both media as they delved deeper into the 20th century. Schoenberg had a particular interest in developing atonal music [where the functional harmony as a primary structural element is absent — definition by Encyclopedia Britannica ], shifting from the conventional notion of having a “home key.” This was in line with Kandinsky’s approach to his paintings, who translated such ideas into irregular intervals of gesture with bursts of dissonant color. 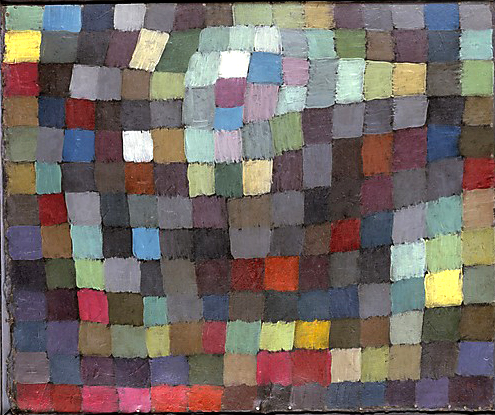 While teaching at the Bauhaus school in Germany during the 1920s, Paul Klee, a trained violinist, often composed paintings with the organization of classical music in mind. Klee’s attention to tone and lyrical use of color is certainly felt in works such as May Picture (1925) and Variations (1927)², while Abstract Trio hints at his three favorite composers, Bach, Beethoven and Mozart. 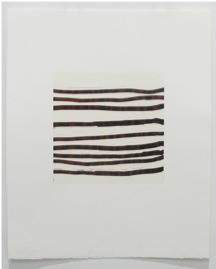 Bach in particular, with his rich, multilayered and dense compositions, continues to inspire many contemporary artists today. Using natural inks or watercolor (right), Tad Mike arranges seemingly discordant mark-making into an ordered ensemble. Watercolor, compared to oil or acrylic paint, offers a special range in tone – a balance between the spontaneity of the water and the control the artist exerts. It has remained an important medium for Melissa Meyer, whose oil paintings also treat color in the same way. In Desto (2013) her gestures seem to suggest a steady swinging movement. Personifying each of these areas with individual sets of movement and space, we can feel the pace of the painting energize as members dance another. 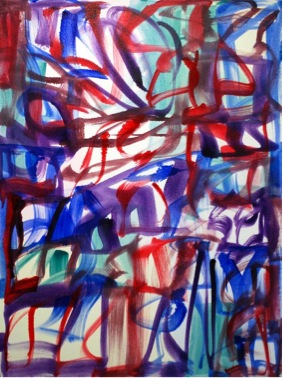 Lyrical abstraction, a term connected to a number of abstract artists working between 1945-1960s, was used to describe the work of Meyer along with others painting all-over compositions (with no singular focal point) that exhibited a nearly patterned organization with vibrational movement. Larry Poons*, also of this group, studied at the New England Conservatory before transferring to MFA in Boston. Orange Crush (1963)** shows how the construction of his paintings were never static, and his works since the 70s have in many ways now released from any notion of the static, favoring surfaces that are thickly applied and rich with movement throughout.

It is reasonable to imagine that each artist, as an individual, must be influenced in some way by music. While some artists have gone on to depict music more literally or scientifically, the hinted association with music at the heart of each of these works speak to the credence of abstract art itself. Understanding the influence of music on composition and color choices is just one way to enter into appreciation of them.

If looking for the rhythmic or color sensitivity is something you enjoy, check out how it relates to other artists such as:

Piet Mondrian (His inspiration from Jazz)

Cy Twombly (And his work based on Vivaldi’s Four Seasons)

What are some artists you love with a strong relationship with music? Email us at contact@galleryIntell and add to the group above!

May Yeung is a NY based curator and the Associate Director of Margaret Thatcher Projects in New York. To learn more about upcoming shows and projects, follow May on Facebook and Tumblr.

¹ Image from the Guggenheim Collection

² Abstract Trio, May Picture and Variations are all currently on view at the Metropolitan Museum Gallery 903, which is dedicated to works by Klee.

* Works by Poons currently on view at Loretta Howard Gallery