It’s not every day that one gets invited to private tours of rare art collections led by the top experts, so when Elizabeth van Bergen of Christie’s asked if I was interested in seeing the rare 18th century Francisco Goya prints at the small gallery upstairs I just nodded and held my breath. For the next 40 minutes I would be the only audience of my host Richard Lloyd, International Head of Department at Christie’s. Richard and I walked around the space, where framed monochrome etchings hung in long horizontal rows. Only some were familiar, mainly the handful of images from the Los Caprichos I studied in college. Others were altogether new to me.

Goya liked to work in series, creating two or three preparatory drawings for each final work. Thus for Los Caprichos, created in 1797 – 1798 the final 80 prints were the result of some 200 drawings. Each is a dark, often sarcastic and satirical vignette depicting grotesque personages in various stages of disillusion and moral decay. The most famous of the series is a drawing titled The Sleep of Reason Produces Monsters. Pertinent commentary during his time and certainly ours, Goya’s image shows what happens when reason and justice give way to complacency and inaction, allowing monstrous prejudices to take hold of society. There are naked witches riding brooms, monstrous mutants flying with eagle’s wings, donkeys mounted on bent-over men, bats with human faces, humans with bat, bird and donkey faces, more donkeys playing the piano and more witches. Nightmares really. And each of these absurd, haunting compositions was a sharp commentary on the precarious state of Spanish society.

Francisco Goya conceived of the series to be sold as a book of 80 plates, but the book failed to realize any significant sales and Goya, in an effort to recoup his investment, and to protect himself from potential persecution (after all his acidic critiques of the Spanish aristocracy could have caused serious problems for the painter) gifted the remaining books along with the copperplates to the King himself and in exchange received a generous stipend.

The complete set of 80 etchings was sold on January 29th for $1.4 million

The other series of aquatints, an uncompleted one, according to my gracious guide, goes by many names. Most commonly the 18 plates are often called Goya’s “dark paintings” started by the artist around 1819 as he recovered from along convalescence.

Christie’s Lot Notes from 2009 tell us that the copperplates Goya created for this series “presumably stayed in Madrid until they were printed and published by the Spanish Royal Academy of Fine Arts in 1864. The Academy published the etchings under the title Los Proverbios (Proverbs) to suggest a connection between the images and certain popular adages or sayings.” “Some of the earliest impressions bear inscriptions, apparently in Goya’s hand, that refer to the scenes as ‘disparates’ and for this reason the series is often called Los Disparates. In Spanish disparate denotes absurdity, something nonsensical, irrational or outrageous, and, since most of these etchings contain such elements the title seems appropriate. Any attempt to find some ultimate meaning must bear in mind Goya’s terrible depression and his preoccupation with the absurdity of life, the forces of evil and the triumph of old age, pain and death.” *

The Los Disparates are even more curious than the Los Caprichos. They are but a wild kaleidoscope of surreal visions ranging from the familiar mutants in unexpected settings to circus animals balancing on acrobats’ ropes, and curious looking elephants. I have to say, my favorite of the lot is a drawing with a heavy black background featuring men in flight, moving through space by manipulating giant bird wings. Here, in the rendering of the bird feathers, in manipulating the light and dark areas of the composition you see Goya’s immense skill as a print maker.

Clearly, some of these images were borrowed from local folklore, albeit art historians have yet to identify those links. “… Subsequent efforts to link the strange content of the images to the many and various maxims in the Spanish language have not been entirely successful”*

The last two series we looked at were much more real in their subject. One: Los Disastres de a Guerra (The Disasters of War) is the artist’s personal account of the wartime atrocities he witnessed in the Spanish countryside as Napoleon’s troops were advancing onto Spain. Torture and death appear almost banal in Goya’s drawings. He awards them no pathos, no prelude and no explanations. They are snapshots into the reality of war and likewise the timelessness of the political and social commentary of Los Caprichos, these images are pertinent today.

Soldiers today treat death with the same disconnected pragmatism as they did 200 years ago. Goya shows the unmasked brutality of conflict without assigning nationality to his soldiers. It’s as if he parted the drapes to reveal what’s behind the scenes of the real war. So relevant are his scenes that one of the images reminded me of a photograph someone posted from the demonstrations in Kiev. Same situation. Same characters. Same dechromed emotions. Same brutality. 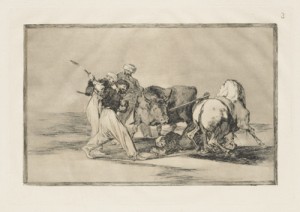 At the end was a selection from a 33 plate series titled La Tauromaquia. An avid admirer of the bull fight Goya, once again, showed the spectacle in all its barbaric gore. One composition in particular stood out. A powerful young bull stands atop a pile of people, some trampled to death, some still fleeing. The animal, proud and tall, is placed all the way to the far right of the compositional frame, his right horn piercing a slouched limp body. (Richard told me that the man was actually the town’s mayor) This particular image is noteworthy because of the compositional contrast. Nothing, absolutely nothing is happening on the left side. It’s as if the bull just charged across the frame, sweeping everything in his path, finally stopping inches away from whatever lay beyond. This saturation of elements on one side vs. the other is a tool Goya employed often and with great success.

As I looked closer at the hair-thin lines of the etching I realized that none of these were signed. Sure, some images had a small, bulbous “Goya” etched into the bottom corner, but they were not actually hand signed. Curious, I asked Richard whether it was not the tradition to sign etchings at the end of the 18th century, and to my great surprise found out that the first artist to sign a print was none other than Toulouse Lautrec. You see, artists produced multiples of the original drawing as means of expanding their sources of income. Sell one drawing, earn once. Make copies and sell those – earn more. But Lautrec realized that by signing a reproduction of his original work he could command a higher price and therefore create a new market for his work. James Whistler soon followed suit.

As my tour drew to a close Richard talked a bit about the process itself. The works we looked at are not technically straight etchings. Instead they are called aquatints. Once Richard pointed out the effect produced on paper as a result of the process, the difference became very clear. Invented by Jan van de Velde in Amsterdam around 1650 the process involved applying acid to a copper plate to produce texture. If you’re familiar with the technique of frottage, the effect produced with aquatint will look familiar. It’s as if a portion of the paper was rubbed against a textured surface to create a relief. So Goya masterfully combined etching and aquatint techniques to create dynamic backgrounds and atmospheric effects.

So my very unexpected and wonderfully enlightening tour of the Goya exhibition at Christie’s reminded me how getting a peak into the history behind the great works of art made me see them in an entirely new dimension. That afternoon, it was Francisco Goya’s turn.