Zavier Ellis, Director Charlie Smith London: Tom is a British artist who started at Chelsea and The Slade and is currently living in Maine in the US. What’s interesting about Tom’s work is he is collecting antique Victorian photographs. They were known as cabinet cards, which was actually an evolution, or a development from carde de visite.  Then in the mid to late 19th century, the growing middle classes would use these portraits of themselves really as visiting cards. 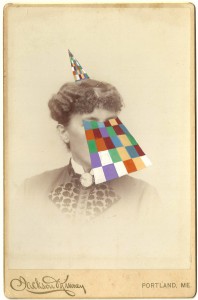 He is very interested in the original sitter, so he instinctively choses what he feels what he works with. Beyond that, he works in gouache. So really the interesting thing is that he is bridging 150 years of visual culture here, starting with the photographic image – going into contemporary painting. Interestingly he also studied sculpture for his M.A., so you also get sculptural elements coming into the work. For example with this piece here, where you can see that he is really engaging with the spatial sense of the piece. He is taking us through the surface and beyond.

Tom works with different motifs. You can see that sometimes he’ll work with flowers, sometimes with these linear abstract patterns, hair, these are exploding geometric clouds and then these pieces are auras. 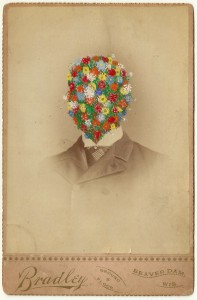 One of Tom’s main intentions is to talk about revealing and concealing, so within this work  there are some subjects that are completely covered in a motif. For example this piece here – Bradley. And then in others, particularly more recently he started to reveal the subject. Previously, most often they were completely covered in paint.  This piece here, for example, that features the exploding geometric cloud, is much more abut the revealing of the personality of the sitter. I think we also need to think of Tom’s work in psychoanalytical terms. You know, the cabinet cards were contemporaneous to Sigmund Freud, the development of his ideas behind psychoanalysis  so we also have this sense of the revealing of the unconscious. The it, the monster, the grotesque, that within us, which generally is concealed. Tom really is, in a way is interested in revealing visually that sense of the unconscious. And at the same time you also had Victorian freak shows, so all of these run alongside each other.