Figures shifting through space and time, frozen in a photographer’s frame… An old tea kettle in a busy marketplace and a woman bearing letters to the past these are the contemplative “phrases” captured by a contemporary Chinese photographer Qin Wen. Monah Gettner, Founder,  Hyperion Press, shares the stories of a disappearing China in Qin Wen’s work. Wen draws his photographs with the rich palette of grays carefully tugging your attention with a subtle red of a traditional Chinese wedding dress or a quiet and pale white of the letters written to those who passed. We see images of crumbling facades about to disappear from the face of China and replaced by the modern infrastructure of a busy society.  We see motion and anonymity in Qin Wen’s stills.

Monah Gettner of Hyperion Press, Ltd described the theory behind one of the most interesting contemporary Chinese photographers, Qin Wen. The symbolism of the specific objects in his large-scale images – white pieces of paper,  a woman in a red dress, an old tea pot – points to the importance of tradition in the modern Chinese life and the new set of values that is slowly replacing the old. It’s a commentary on the pace of globalization and social evolution. It’s Qin Wen’s way of slowing down time and freezing our gaze on the treasures of individuality that are about to vanish into the stories of “the way it used to be…” – galleryIntell

I’m Monah Gettner and my gallery is Hyperion Press, Ltd. I’d like to introduce you to the work of a Chinese artist, who has attracted a great deal of very positive attention, I’m happy to say – his name is Qin Wen. He talks essentially about the changing face of China. 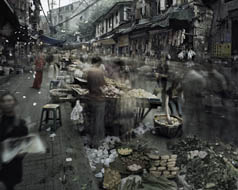 In this particular image we see an old market place, which will soon, sadly, be destroyed. He shows people, just going about their business. In the image we’ll see a woman in red. In China red is worn at weddings and it symbolizes life, renewal and hope. The small white pieces of paper that you see here are letters of affection written to those who have died. 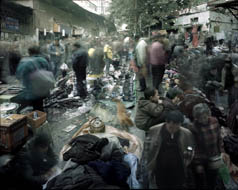 In the picture also, although it’s quite hard to see, is a small detail – a tea kettle. As I’m sure you know, tea is a very important part of Chinese life, as it is in Japanese life. As Qin Wen’s son described it the kettle is a “mark of family”. We have a family kettle which is used always.

Wen places the kettle, as he does with the lady in the red dress, in all his other work and it symbolizes the coming together of the generations and the history of China, and each and every family – a message that is much prized.